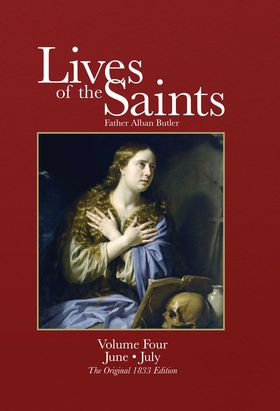 Volume 4 of Butler’s Lives covers the months of June and July. The last three volumes will be Vol. 5 Aug./Sept., Vol. 6 Oct./Nov., and Vol.7 December and the appendices. Putting these invaluable books together in a new and modern format has been a joy for us. We hope that you are enjoying them. Vol. 4 at 806 pages is the largest. Some of the longest treatises are contained in it. The section on St. Ignatius of Loyola is almost a complete biography!

A great man once said that “History is the laboratory of Wisdom.”
And where do we find the best history? It is found in the lives of the
saints, for it is through their lives on earth, lived within the union of
Christ’s mystical body, the Catholic Church, that we see the only history that
truly matters for all eternity.
This spectacular history by Fr. Alban Butler, The Lives of the Saints, presents to
the reader the life story of over 1600 saints and their times. In the original
introduction we find this bold statement: “It is on this account we have
ventured to designate The Lives of the Saints an historical supplement to the
Old and New Testaments. We think this work deserves to be so considered,
on account of the close resemblance it bears to the historical portions of holy
writ. Let the divine economy, in this respect, be for a moment the subject of
the reader’s consideration.”
Loreto Publications has here reproduced the finest original edition of the text
from the early 19th century with no modernization, alterations, deletions, or
additions to the product of Father Butler. Father Alban Butler was born in 1710, at Appletree, Northamptonshire,
the second son of Simon Butler, Esq. Orphaned at
the age of eight, he was sent to be educated at the English College,
Douay, in France. In 1735, Butler was ordained a priest. At Douay, he was
appointed professor of philosophy, and later professor of theology. It was at
Douay, he began his principal work The Lives of the Fathers, Martyrs and Other
Principal Saints. He also prepared material for Richard Challoner’s Memoirs of
Missionary Priests, a work on the martyrs of the reign of Elizabeth.
He labored for some time as a missionary priest in Staffordshire, and was
finally appointed president of the English seminary at Saint Omer in France,
where he remained till his death in 1773.