Home/Literature/In Towns and Little Towns
13 of 24 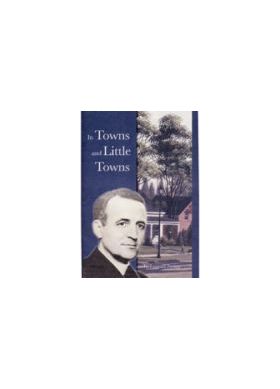 To My Mother, from her 'Minstrel Boy'.

So, you do not like poetry. Too many flowers and angels and stars and clouds. And too many adjectives ending in “Y”. Besides, the better the poem the less you can understand it, right? You are an ordinary Joe who prefers more solid food for his mind and you do not really care if the words rhyme anyway. Well, Joe, lighten up! Let your mind get a taste of Father Feeney’s verse. Your whole family will enjoy the new turf. It will warm the heart. In fact, every one of Father’s poems comes with that guarantee.

Did you recall, Methuselah
When you were white and old
A maid, a moonlit night and a
Sweet vow you told?

Methuselah, did you recall
The song your heart had sung,
When she was fair, and love was all,
And you were young?

And count each lonely century,
And live the days again
When you were a hundred and twenty, and she
A hundred and ten!

Angela died today and went to Heaven;
We counted her summers up and they were seven.
But why does that trouble you, unloosened shutter,
That flap at my window in the wind's wild flutter!

Angela's eyes tonight are cold and dim,
Off in the land of song and Seraphim.
But what does that mean to you, O creaking stair,
And mice in the wall that gnaw the plaster there!

Angela's little hands are folded white,
Deep in the meadow, under the starry night.
But why should an ugly gnat keep finely whining
Around the candle-flame beside me shining!

And never again — and never again will she
Come running across the field to welcome me.
But, little sheep-bells, out on the distant hill,
Why, at this hour, do you wake and tinkle still!

And not any more—alas!— and not any more,
Will she climb the stairs and knock at my lonely door.
But, moaning owl in the hayloft overhead,
How did you come to know that she was dead!

Whenever the bright blue nails would drop
Down on the floor of his carpenter shop,
Saint Joseph, prince of carpenter men,
Would stoop to gather them up again;
For he feared for two little sandals sweet,
And very easy to pierce they were
As they pattered over the lumber there
And rode on two little sacred feet.

But alas, on a hill between earth and heaven
One day—two nails in a cross were driven,
And fastened it firm to the sacred feet
Where once rode two little sandals sweet;
And Christ and His mother looked off in death
Afar—to the valley of Nazareth,
Where the carpenter's shop was spread with dust
And the little blue nails, all packed in rust,
Slept in a box on the window-sill;
And Joseph lay sleeping under the hill.

I pity the slender Mother-maid
For the night was dark and her heart afraid
As she knelt in the straw where the beasts had trod
And crooned and cooed to the living God.

And I pity Saint Joseph whose heart wept o'er
The ruined stall and the broken floor
And the roof unmended for Him and her,—
And to think himself was a carpenter!

O Thrones, Dominions, spirits of power,
Where were you there in that bitter hour!
And where the Cherubim-wings withal
To cover the wind-holes in the wall!

Three lambs a shepherd-boy brought, and these
Were Powers and Principalities;
And Ariel, Uriel, angels bright,
Were two frail rays from a lantern-light.

The faded eyes of a wondering ass
Were dreamy mirrors where visions pass.
And a poor old ox in the stable dim,
His moo was the song of the Seraphim!