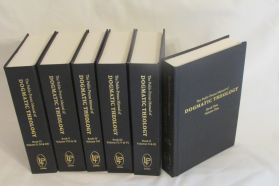 The Pohle-Preuss  Manual of Dogmatic Theology In Twelve Volumes-

(Pronounced POH-lay PROY-s) Many Catholics living today can remember when priests were well trained in theology and could express the Faith properly in their sermons and in their writing. That is because they were given sound teaching at the seminary in Logic, Philosophy, and Dogmatic Theology from textbooks such as this 12 volume set. The famous Pohle-Preuss manual was used in many seminaries in America and other countries prior to the 1950's when seminary training began to go downhill.

This particular manual was used in the Jesuit seminary where Fr. Leonard Feeney, who was one called by his Jesuit superior "the greatest theologian we have in America...by far" was trained. This beautiful hardbound series is an exact reproduction of the edition originally published in 1911, and it was written by  Rt. Rev. Msgr. Joseph Pohle and edited by Arthur Preuss.

The original publication was in 12 separate volumes. Loreto has re-issued the complete set of 12 volumes in six books. The six books may be purchased individually or as a set.