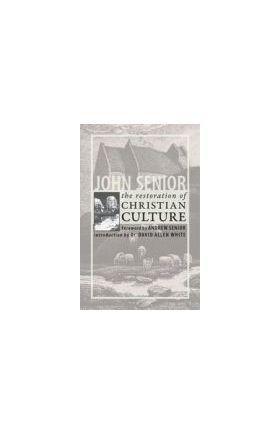 The Restoration of Christian Culture is a sequel of sorts to its companion, the Death. When it was first published in 1983, it was even more eagerly awaited and sold even more quickly, owing to the rapidly spreading fame of its predecessor. Restoration has been compared to a series of sermons  like spiritual reading that one comes back to again and again  but on topics social, cultural, and political. Picking up where Death leaves off, the Restoration continues to sound the alarm regarding the continuing extinction of the cultural patrimony of ancient Greece, Rome, medieval Europe, and the early modern period of Western civilization, owing to the pervasive bureaucratization, mechanization, and standardization of the increasingly materialistic lives of those living in the "first world." Moving beyond mere criticism, however, the "sermons" in Restoration offer challenging and provocative ideas for recapturing and again living, truly and deeply, the cultural traditions bequeathed to the West and to the world by its giants of classical and Christian history. Bringing the wisdom of Aristotle, Augustine, and Aquinas, to note just a few, into touch with the social, political, and personal life of modern citizens of Western civilization  to make us not just heirs, but fellow citizens of a common culture  is the aim of Restoration. Along with its companion, it has changed, comforted, inspired, and converted countless souls.

Most impressive among John Senior's numerous credentials as a cultural historian, literary critic, and scholar and practitioner of education is his experience as founder and leader of the University of Kansas Integrated Humanities Program, which he developed and ran with two colleagues at the University. The program was a four-semester course for freshmen and sophomores that combined the best of the Socratic method with the "great books" approach to education, while it was neither of those things alone. Its controversial aim was to convince students that there is a truth, and that the truth is worth knowing; its controversial method was the cultivation of "poetic knowledge," through real-life immersion in reading, memorization, and discussion of the classics of Western thought, art, and literature. Its controversial outcome was hundreds of conversions to Catholicism. This experience, more than any other, provided fruit for the keen insight and sometimes shocking observations presented in Senior's books.
Foreword by Andrew Senior, Introduction by David Allen White, Ph.D.