Home/Devotion and Spirituality/Resurgent in the Midst of Crisis: Sacred Liturgy, the Traditional Latin Mass, and Renewal in the Church
54 of 74 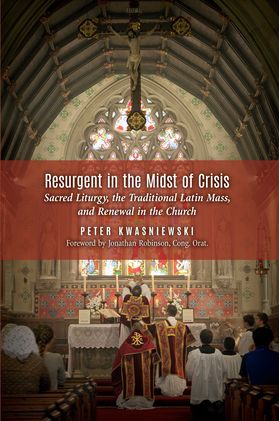 SINCE THE TIME of the Second Vatican Council, the Catholic Church has experienced an unprecedented crisis of identity, symbolized and propelled by the corruption of the greatest treasure of her tradition: the sacred liturgy. The result has been confusion, dismay, devastation. To the surprise of some, however, the same half-century has witnessed a growing counter-movement of Catholics who find in the Church's traditional liturgy a perennial witness to the orthodox faith, a solid foundation for the interior life, an ever-flowing source of missionary charity, and a living embodiment of the true Catholic spirit.

In this book, Peter Kwasniewski presents a fearless critique of the path of liturgical novelty and a detailed apologia for liturgical tradition in all its beauty, richness, and profundity, addressing such topics as solemnity, sacredness, the language of symbols, contemplation, participation, the symbiosis of lex orandi and lex credendi, silence, music, worship in Latin, and Gregorian chant. He confronts the humanism, rationalism, utilitarianism, and modernism so prevalent in the liturgical reform, assesses the prospects and limitations of a "Reform of the Reform," and reflects on the great gift of Summorum Pontificum. In the end, Kwasniewski argues for a zealous recommitment to Catholic Tradition in its fullness, starting with divine worship and embracing the whole realm of faith and morals, including integral Catholic social teaching.

Evidently, there is an all-encompassing crisis in the Church, which the Extraordinary Synod unveiled to a global audience. Unexpectedly a resurgence is taking place, with the usus antiquior or classical Roman Rite at the very heart of it. To those who have loved the traditional Mass all their lives, those who have newly come to it, or those who simply wish to learn more about the issues, this book offers abundant matter for reflection.
(Corrected edition, now with comprehensive indices.)