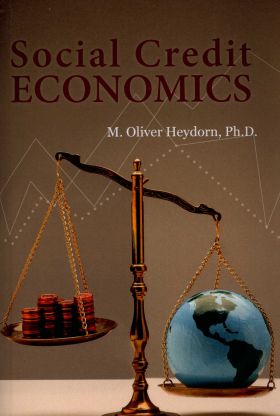 This is the best scholarly summation of the Social Credit solution to the private financial monopoly that rules the world of economic life in the interests of the anti-Christian oligarchy that controls it.

In these early years of the twenty-first century, marked as they are by grave and recurring financial crises as well as by wars and rumors of wars, it is necessary to review in sufficient depth one of the key lessons of the twentieth century that humanity at large has yet to appropriate. Nearly one hundred years ago, at the time of the First World War, a professional engineer by the name of Major Clifford Hugh Douglas was tasked with sorting out an accounting muddle at the Royal Aircraft Factory in Farnborough, England. His analysis occasioned a series of stupendous discoveries that eventually gave rise to the world-wide Social Credit movement. Douglas revealed that modern economies operate on a financial basis which is severely flawed and that conventional methods of compensating for the underlying dysfunction threatened humanity with nothing less than economic, political, social, cultural, environmental, and international catastrophe. Thanks to his genius, he was able to devise an interlocking set of financial proposals designed to reinedy the situation. These measures, if adopted in time and properly implemented, promised not only to restore the economic groundwork of civilization to a state of homeostasis, but also to release society's enormous potential for authentic progress on all planes of human endeavor.

Humanity is once again at the crossroads. We have set before us, as it were, the blessing and the curse. We must choose the path that we prefer to follow. In Spcial Credit Economics, Dr. Oliver Heydorn provides us with a clear and systematic exploration of all of Douglas' fundamental economic ideas so as to greatly facilitate the possibility of choosing wisely.