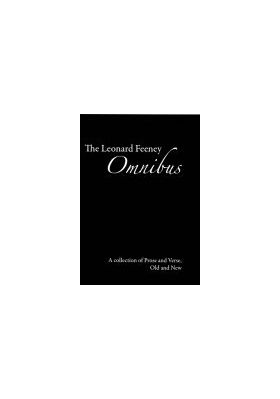 This collection  of poems and other literary works of Father Feeney is not a complete collection, but a large one nonetheless. It includes almost all of four of his best books: Survival Till Seventeen, Fish on Friday, In Towns and Little Towns, and You’d Better Come Quietly, as well as some of his other works. You will rarely encounter another modern Catholic poet and writer with such depth of faith and dramatic power with words as Father Leonard Feeney. Frank Sheed, of Sheed & Ward, his original publisher and a well-known Catholic writer himself, once labeled him “America’s Chesterton”. Coming from a Catholic Englishman, that is a grand compliment indeed for an American Irishman!

“The priest more than a member of any other profession, understands human nature profoundly, and when this is coupled with literary ability, wittily and tolerantly presented, the product is truly delightful.”   —Commonweal
“Father Feeney has… revealed the playfulness of his wit, the keenness of his observing eyes, the tenderness of his Irish heart . . .
and above all the dramatic power which is his…”      —America
“We need   more like him. His laughter is as light as his faith is deep.”      —Boston Evening Transcript: under the heading “Favorite Poet”

Most of the material in this Omnibus has been printed before. Yet the publishers have done the cause of American letters a considerable service in bringing out this collection. Certainly the years to come will see more extensive editions of Father Feeney’s works. We are fortunate in having this much now. This Omnibus, small though it is, is far more effective than little books and scattered articles in bringing us to appreciate the foremost man of letters in Catholic America.

His trained and gifted mind has caught what is best in our own life scene. The Omnibus shows us Catholic loyalty in a barber shop, the theological virtues on the Boston and Albany, apologetics on the New York, New Haven and Hartford, and God’s charity in Lynn and Paris. The things he saw are the things we all might have seen, and which we know better because he has seen them.

Father Feeney as an author we reverence and acclaim. However we are considerably less enthusiastic about his prowess as an editor. It is difficult in the extreme to pardon a man who left “The Brown Derby” out of a Leonard Feeney Omnibus.

This book contains the things I like best of all I have written up til 1943. It does not contain the things I hope to write from now
on. And so, though it is called an “omnibus,” it is not to be taken as an “obituary.”
My publishers have been very kind in letting me make my own choices. A number of things have been omitted, over protest of my friends. But a poet—if such I be—must ultimately be his own critic, his own chooser. It is one of the few freedoms left a man in this merciless age.
I am not, as one critic has kindly suggested, “a poet of many personalities.” I am a poet of one personality who has had many moods. I realize I could have made a much greater reputation for myself if I had written everything in one groove. But in this matter I took a cue from God the Father—who is the poet, the maker, in God—and who could have made a much greater reputation for Himself if He had made the lion and omitted the mosquito.
Other than this, I offer no apologies.
L. F.           August 6th, 1943.

The Voice
Gentlemen With a Grudge
Design for a Grecian Urn
Sunday Evenings
Lesson from the Little Mosquito
Wing Lee, Hand Laundry
Heaven in a Pond
Alicia
Art
The Poets and the Mystics
Poetry
Childhood
The Exile
The Imagination Guy
The Classics
Farewell Without Tears
The First Command

Metaphysics in the Marketplace
After This, Our Exile
Love Is a Loyalty
The Way of the Cross
Sister Jeremy
The Dove
The Bee
Poor Turkey
Sheep Ritual
The Whale
Brief Litany
The Creature Feature
Admiring Maura
Aunt Abigail
The Devil’s Man
The Fairyland
To an Infant
The Donkey
Stanzas for the Unastonishable
Reflection on a Flea
Coward Noel
The Piano Tuner
The Milkman
Jeremy
Nightly Outrage
Mrs. Whittle
A Prayer for Protestants
Hair Ribbons
St. Joseph’s Christmas
Warning to Contemplatives
The Mistress of Novices
O Love Ave Verum Corpus Natum
Farewell
Buzz, a Book Review
And Still…

The Rose
Perfume and petal
Are qualities
That test love’s mettle
With too much ease.

Bramble and briar
Will soon discover
Who is the liar
And who the lover.

The Donkey
I saw a donkey at a fair
When sounds and songs were in the air;
But he no note interpreted
Of what the people sang or said.

Hitched by a halter to a rail,
He twitched his ears and twirled his tail;
In every lineament and line
He was completely asinine.

Though I had heard in local halls
Some eulogies on animals,
I thought it would be utter blindness
To show him any sort of kindness.

It seemed to me that God had meant
To make him unintelligent,
And wanted us to keep our places,
I in my clothes, he in his traces.

And so I turned my mind to things
Like banners, balls, balloons and rings,
For which I had to pay my share
And went on purpose to a fair.
But down the mid-ways while I went
On all the pageantry intent,
I stopped, and started to remember
A little stable in December,

Battered by wind and swathed in snow,
Nearly two thousand years ago,
When one poor creature like to this
Saw Mary give her Child a kiss.

So back I sauntered to the rail,
And stared at him from head to tail,
And gave his cheek a little pat,
And simply let it go at that.

The Way of the Cross
Along the dark aisles
Of a chapel dim,
The little lame girl
Drags her withered limb.

And all alone she searches
The shadows on the walls,
To find the three pictures
Where Jesus falls.