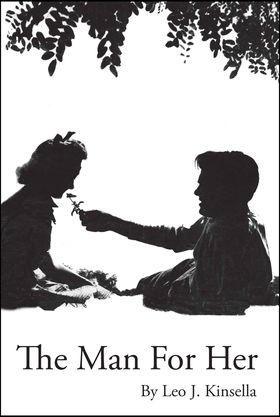 Happiness does not just happen . . . It must be earned!   Here is a marriage blueprint that every man can follow.
Great marriages do not just happen, they are made. It takes three parties to make a good marriage: the husband, the wife, and the Lord. This book is concerned with helping the man to become ‘the man for her’. Father Kinsella had already published his famous and successful book The Wife Desired, which is also available from Loreto Publications, in 1952. The first book of advice for women was so successful that the demand for a book of marital advice for men forced Father to write this one in addition. He sat for many years on a diocesan separation court and had also successfully counseled many unhappy couples during his years in the priesthood. Both books sold over a quarter of a million copies shortly after their publication and were read by Catholics and non-Catholics alike. They are practical manuals for how to improve your chances for a happy and successful marriage.

When this book was first published in 1957, one in four marriages in the USA ended in divorce. Today, half of all first marriages end in divorce, and a much higher percentage of second and third marriages find the same end. This means that the majority of Americans are unsuccessful at the most important enterprise of their life, and it follows that the resultant destruction of the happiness, mental stability, and moral character of the majority of the people is the greatest problem that we face as a nation.

Of course, the dangers to the salvation and earthly happiness of these people, and to the unfortunate children born of such unions, is where the cold statistical facts become more personal and of immediate concern to each of us. The divorce rates also do not speak to the issue of those many couples who do not divorce, but who nonetheless are not living in what could be termed deeply happy and fruitful marriages. Being a party to an unhappy marriage is one of the most difficult (yet largely avoidable) situations that anyone can endure in life.

Doctors, lawyers, and other professional men study and train for years before they practice. Likewise, tradesmen of all sorts must slowly learn their trade. But who needs any preparation to be a husband? He is fitted by nature to be the answer to any discerning maiden’s prayer. All he has to do is pop the question to the fluttering girl, stand before the altar, and he has it made.

“Oh, yes?” All the ladies sing out in chorus. There do seem to be a few dissident voices raised to the statement that all males, just because they are males, naturally slip into the groove of the perfect husband. Some never seem to hit the groove. Others, after brief success, jump out of the groove and wobble all over the family lot.

For women marriage is a full time job. For men it is a part-time job. A big part of his time and energy is spent in making a living. No doubt that is why most of the advice found in magazines, Sunday supplements, and so forth, is for wives. In fact, most of the women’s magazines devote a considerable amount of space to the end of improving m’lady. How to wear clothes more elegantly, how to make better use of makeup, how to be the best cook on the block, how to be a successful and happy wife—these are the topics which help to sell magazines to ladies. Has anyone heard of a man’s magazine devoted to his self-improvement?

Even the Bible in its numerous references to husband and wife gives much more advice to the wife. So, perhaps, husbands should be let go blissfully on their way. After all, what wife would wish to destroy her husband’s self-confidence? I certainly do not intend to trifle one bit with that male ego.
The only effort in subsequent chapters will be to observe successful, happy husbands in action. How does a husband manage to have the wife desired, and in having her, reach the pinnacle of earthly happiness? We hope to find the answer to this question as we read on.

The most miserable people in the world are those who bring unhappiness to others. Contrarily, the happiest of all are they who make others happy. Has anybody ever seen a miserable, cantankerous wife with a joyful husband in tow? So, husbands, if you would escape a fate worse than death, cultivate a happy wife. The Man For Her is smart enough to keep his wife purring. And should he stumble into the doghouse he knows the way out.

One day, three golfing companions and I were witnesses to a very amusing situation. A real duffer or ‘hacker,’ as we used to say in caddie parlance, was manfully swinging away on the first tee. These were not practice swings. He had blood in his eye, and had his golf ball been a living thing it would have been in danger of being hacked to death. Finally he dribbled the ball off the tee. As he stalked down the fairway he pulled out of the caddie cart a nationally read picture magazine. In that particular issue there was an article by a famous professional giving away the secret of his long domination of the pro tournament tours.

“If somebody else can drive two hundred and seventy-five yards down the fairway, why can’t I?” was written all over his face as he glared at the magazine. We were skeptical of the results of his determined reading. Only an experienced student of the game of golf could understand the article, much less put it into practice. Yet, the duffer was reading it avidly as he trudged over to the rough after his ball. The incongruity of the situation made all of us chuckle.

Many tens of thousands of men, many of whom are husbands, do wish to improve their golf game, otherwise there would not be so many books on the subject. Hardly a season passes without one of the leading professionals coming out with a book on how to play better golf.
Every time a person goes to school or reads a book to learn something it is an act of humility. It is a healthy admission that he does not know everything. We have humble golfers. Can’t we have humble husbands?

Countless happy marriages are mute testimony that there are humble husbands. However, divorce courts, marriage counseling services, family relation institutes, and aggrieved wives are testimony (and not so mute) that many husbands could learn a thing or two. Here I must be allowed the indulgence of a word or two to the wise. My own experience as a marriage counselor is that failures seldom indicate any realization that there is anything to learn about playing the role of the successful husband. At best, if the light ever came, it came too late. The wife was through, gone.

The purpose of this book is not to attempt to revive dead marriages. If, however, through the grace of God, the reunion of one husband with his wife is accomplished, all this ink would be justified. Yet, I am not appealing to hopeless, psychopathic ‘duffers.’ I am not capable even if I wanted to deal with them. The hope in these pages is that some young men may become more aware that, as there are a few tricks to every trade, there is something to be said for preparing to be a husband. Also, perhaps some husbands could pick up a tidbit here and there whereby they could bring a little more happiness to those wonderful girls they married some years ago.

Once I heard a wife say that her husband was the most wonderful man in the world and that she adored him. What husband is there who could be indifferent to such praise from the one he loves?

What husband worthy of the name would not literally stand on his head to merit such esteem?

Full happiness can come to a husband only through his wife. Success in business and the social world are as ashes in his hand, if he fails to win the love and admiration of his chosen partner for life. The unsuccessful husband is sometimes the successful businessman. Frustration at home drove him to find his niche elsewhere. And it is a niche he would gladly vacate were not real happiness denied him in his own home.

So many happy husbands and so many miserable husbands: What is the reason? Different wives, of course! The reader who thinks that to be the only answer should drop this book and go quietly to sleep. On the other hand, if he knows this ungallant answer is at least an over-simplification, in subsequent chapters he may find many different types of happy husbands and how they were successful.

During the months I spent collecting the material for this book I asked quite a number of young ladies to give me, in a few hundred words, their picture of a real husband, a flight of fancy, if they so desired. I have come to realize that the task was far from easy. Not one of the young ladies produced a thing in spite of several reminders. One, upon being asked by her mother why she had not begun writing, replied that if she could get down on paper the things in her soul people would think she was looking for God, not a husband.