Home/All Products/Tragedy of James Connolly, The
248 of 273 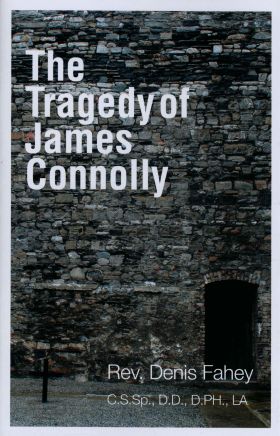 Father Denis Fahey, C.S.Sp., D.D., D.PH., LA — Small book $6.95
Father Denis Fahey’s pamphlet, The Tragedy of James Connolly, which is now, I am glad to observe, going the rounds among those who study the social problem seriously, is pre-eminently a popular, if scholarly work. Connolly can be and is being gravely misused. The fact that he died within the bosom of the church makes his social heresies all the more a dangerous weapon in the hands of subversivists. Young and earnest trade unionists speak of him in awe, as if, from the Catholic standpoint, he were the complement of Pearse. Father Fahey’s pamphlet will disabuse them of this idea . . .. For all that Connolly was, excepting that he was a social subversivist, we honor him—for his self-sacrifice, his courage, his patriotism.
- Pat Murphy (In The Standard, Jan. 23, 1948)

“Communism is intrinsically wrong, and no one who would save Christian civilization may give it assistance in any undertaking whatsoever”

“In the beginning, Communism showed itself for what it was in all its perversity; but very soon it realized that it was thus alienating the people. It has, therefore, changed its tactics, and strives to entice the multitudes by trickery of various forms, hiding its real designs.”

James Connolly (1868–1916) was an Irish Patriot and a Socialist labor leader. As a member of the Irish Republican Brotherhood he was appointed to be the Commandant of the Dublin Division of the Army of the Irish Republic and was the officer in charge of the occupation of the GPO (General Post Office) in Dublin during the Easter Rising of 1916.
Connnolly was one of the seven signers of the Proclamation of the Irish Republic and one of the sixteen leaders of the 1916 Easter Rising who were executed by the British in Kilmainham Jail. He was the last to be executed there, as he had been seriously wounded in the fighting and had to be brought to the execution on a stretcher and strapped to a chair so that the firing squad would not have to shoot a man lying on the ground in order to execute him.
James Connolly was also a Catholic. The contradiction between his socialist beliefs and his Catholic faith was a problem that he apparently did not understand fully during his active years. As he approached his death he asked for and received the sacraments but his ‘socialist’ legacy has been a problem for Irish patriots ever since. Father Fahey sheds some light on this problem in this treatise that he describes as The Tragedy of James Connolly.

Author’s Foreword
I profited by the fact that the editor of The Standard assigned me the task of reviewing James Connolly: The Forerunner, by R. M. Fox, to set out the opposition between the philosophy accepted by James Connolly, namely, that of Karl Marx, and our Lord’s Program for Order. Irishmen and Irishwomen are being stridently urged to follow James Connolly’s principles. It is true that they may be told in passing that James Connolly got his economic principles from Karl Marx, but they are far from realizing that Marx’s principles mean the overthrow of all that our Lord Jesus Christ and his Blessed Mother stand for. I trust that this book will enlighten them.

Connolly’s Mind Typical of that of many Catholics
Did James Connolly himself realize the opposition? In The Standard of April 18, 1947, a letter appeared over the signature of Michael Fitzgerald, M.D., Portsmouth. The essential part of Doctor Fitzgerald’s criticism of the first portion of my review runs as follows: “The writer (Dr. Fahey) bases his criticism of Connolly on the existence of two contradictory principles amongst the latter’s intellectual tenets—Catholic Doctrine and Marxist Communism. Now it is fundamental in Catholic philosophy that the normal human intellect cannot at one and the same time give true assent to contradictory judgments. Therefore one must conclude from this, together with Dr. Fahey’s criticism, that the intellect of Connolly was either (a) abnormal or (b) feigned external belief in either Catholicism or Marxism, and therefore Connolly cannot escape the charge of hypocrisy.”
To this criticism Mr. Brendan Barry replied, in The Standard of May 2, 1947, as follows:

“Connolly had not the intellectual vigor to see what Pope Pius XI states, namely, that ‘it is false that economic science and moral discipline are so distinct and alien that the former in no way depends on the latter.’ For Connolly ‘Socialism is neither Protestant nor Catholic, Christian nor Freethinker…..  it is only human,’ and Mr. Fox approves of this. James Connolly was like so many other Catholics who hold philosophical doctrines that contradict the Faith, but do not see the contradiction. The best that one can hope for is that this intellectual tragedy—and it is a tragedy, pace Doctor Fitzgerald—will not lead to the greater tragedy in action.

“Accordingly, Doctor Fitzgerald’s disjunction in regard to James Connolly, namely, abnormality or hypocrisy, is not complete. There is a third state, namely, the state of inability to see contradiction of the Faith, either because of ignorance of our divine Lord’s Program for order or because of ignorance of the full meaning of the philosophy held.

The intellectual tragedy in James Connolly’s case did lead to the greater tragedy in action, as Fr. Fahey has shown, for James Connolly chose Marx when he saw Marx in contradiction with the church’s teaching on economics. Would it not be a still greater tragedy if those who have their grip on Russia could succeed in fooling Irishmen and Irishwomen into being their blind instruments, by using James Connolly’s name? Doctor Fitzgerald condemned Fr. Fahey as lacking in charity. Is it not charitable to seek to avert that disaster?”

An Example of Connolly’s State of Mind
A typical example of James Connolly’s illogical thinking is to be found in Chapter VII of The Reconquest of Ireland. “The democracy of Ireland,” he writes, “amongst the first of the steps necessary to the regeneration of Ireland, must address itself to the extension of its ownership and administration to the schools of Erin. Whatever safeguards are necessary to ensure that the religious faith of the parents shall be respected in the children will surely be adequately looked after by the representatives of a people to whom religion is a vital thing. Such safeguards are quite compatible with the establishment of popular control of schools.” True democracy for James Connolly is Marxian “democracy.” Now, for Marx there can be no question of religion, as, according to his philosophy, human beings are merely evolving animals. Animals have no religion, and rightly formed human beings have no need for it either. The governing classes of the past inculcated religion, because religion helped to keep the masses subservient, in the hope of a better world beyond the grave. There is no hereafter, so “religion is the opium of the people.” Accordingly, the whole aim of a Marxian state is to impose the philosophy of Marx and train human beings to subject themselves completely to the collectivity, that is, to the clever schemers at the top. “In every phase of education in the Soviet Union, the doctrines of the Communist Party are the only ones which can be presented to or considered by the learners.”

“Under the constitution, religious instruction in public or private schools was forbidden. However, until 1929, children in groups of three or less were allowed to receive religious instruction, provided it was given outside the churches and schools. The decree of April 8, 1929, abolished this right and confined the teaching of religion to the parents.” Art. 124 of the 1936 Soviet Constitution reads as follows: “In order to ensure to citizens freedom of conscience, the church of the U.S.S.R. is separated from the state, and the school from the church. Freedom of religious worship and freedom of anti-religious propaganda is recognized for all citizens.” We can thus realize how silly and illogical is James Connolly’s talk about safeguards for religion in the schools under Communism.

Let us now see what freedom of worship means in practice. In The Weekly Review of May 8, 1947, there appeared a few extracts from an article by Herbert Ashley in The Daily Telegraph, on the church in Russia. We read therein: “Full Catholic services are permitted—Mass and Benediction—but no instruction in the Faith can be given. . . . Over all worship looms the shadow of the terrible Lubianka Prison. The spies of the Lubianka are in the congregations in the Catholic church. I have seen them half-hidden in the basements of houses facing it. They take photographs of the worshippers going into the church. They even go into the confessional and try to trap the priest. Each sermon is preached in English, French and Russian, and is read from manuscript. Thus, if there is any argument about what was said having overlapped the constitutional line between worship and instruction, the written word can be evidence.”

Marx the Conspirator
What James Connolly seems never to have grasped is the fact that Marx, the pseudo-philosopher, was a very clever plotter. For him, James Connolly and the workers of the world were only pawns in a gigantic game. Those who wish to study this aspect of Marx’s career will find an outline of it in my book The Mystical Body of Christ in the Modern World (pp. 82–87), and a detailed study in the French work there referred to, namely, Les Origines Secrètes du Bolshevisme, by Salluste. It was a tragedy that James Connolly did not see whither he was being led. Those who allow themselves to be fooled by the planners now using his name are certainly less excusable.

Communist Papers and Publications
As I shall have occasion to speak of Communist Papers, I have thought it well to copy out a few lines from the instructions to Communists contained in the Theses and Statutes of the Communist International, Moscow, 1920: By means of deceit the pressure of capital and the bourgeois government, the bourgeoisie deprives the revolutionary proletariat of its press. For the struggle against this state of things, the Communist parties must create a new type of periodical press for extensive circulation amongst the workmen:

(1) Legal publications, in which the Communists, without calling themselves such and without mentioning their connection with the party, would learn to utilize the slightest possibility allowed by the laws as the Bolsheviki did at the time of the Tzar after 1905;
(2) Illegal sheets . . . giving the proletariat undiluted revolutionary information and the revolutionary slogans . . . “All periodical and other publications, as well as all party publications and editions, are subject to the control of the Presidium of the party, independently of whether the party is legal or illegal. It should in no way be permitted that the publishers abuse their autonomy and carry on a policy not fully corresponding to the policy of the party.”