Home/Doctrine and Theology/Ebook - A Companion to the Summa - Vol. II The Pursuit of Happiness
18 of 71 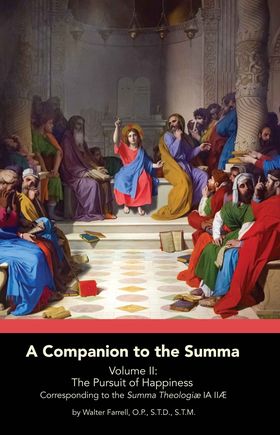 Volume Two
There is a need felt by those who, having heard enough of St. Thomas to whet their appetite, suddenly discover that they cannot go directly to St. Thomas without the guidance of a professor; and for most of them the leisure days of the classroom are over forever.
This, then, is the double purpose of this book: to furnish a rational defense of his faith for the ordinary Catholic and to open St. Thomas to the layman who has no professional philosophical or theological knowledge. It is not, then, intended only for the very learned, nor for a textbook. If it must be described in a phrase, it might best be called an easy guidebook to St. Thomas’s greatest work.
Just as a guidebook to Paris can be best evaluated in the streets of Paris, so this guide book to the Summa can be best appreciated in the pages of the Summa, by comparing the individual chapters of the book with the corresponding questions of the Prima Secundae (First Part of the Second Part) of St. Thomas’ Summa, questions that are given at the head of each chapter. Any particularly striking point will be found more fully and more beautifully developed in the Summa itself; further proofs, explanations, and illustrations can all be had directly from St. Thomas.
It is important to remember that it is the Summa reduced to popular language and not merely another book about St. Thomas or about the Summa. In fact, it is often more than that, for, particularly on difficult questions, the parallel passages in other works of St. Thomas have been freely used where the conciseness of the Summa might have caused some obscurity for one not wholly familiar with the thought of Thomas.