Home/Doctrine and Theology/Ebook - A Companion to the Summa - Vol. IV The Way of Life
20 of 71 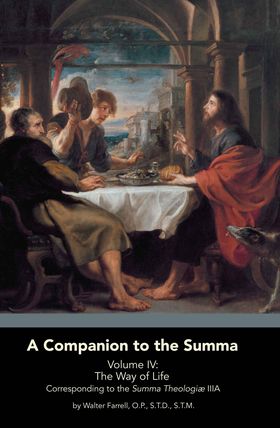 Volume Four
St. Thomas died too soon to finish his book, the Summa Theologica. Not all authors are so fortunate. This book marks the completion of a series, projected long ago perhaps with an eye to Thomas’ good fortune. The first was a search for the ultimate answers that form the bedrock of human life, human action, and the living of human life; the second furnished the key to human life and human action; the third concentrated on the living of human life in all its exuberant fullness; this, the fourth, traces the royal road a man’s feet must walk and the goals that await him at the end of the journey.
It was the Son of God Who declared. “I am the way”; this book takes His words literally, as they were meant to be taken. Its subject matter, then, is the sublime mystery by which the Son of God became man to lead men to God, the mystery of the Incarnation. It does not stop at an examination of the mystery but goes on to trace all the consequences of God’s dwelling among men: the life of Christ, detail by detail; His blessed mother; the continuation of His life in the sacraments; and the goal of heaven which is at the end of the royal road, the goal of hell which is the terminal of any other path. From beginning to end, this book deals with the supernatural, and that without apology, excuse, or defense; all this has been taken care of in previous volumes. Its contents are thus not so much an argued thesis as a divinely stated fact. If a modern reader is avid of facts, he will find a sublime diet of divine facts here; if, however, he is fastidious in the matter of facts, particularly supernatural facts, this diet may well prove too much for him.
It was not, however, for the fastidious, but for those who were hungry for God that these books were written. If they do something to stave off starvation from those who have the courage to admit their hunger, Thomas may be pardoned for not having seen to it that they were not finished, and I may be forgiven for the effrontery that began them.
Again, I wish to express my gratitude to Thomas for the good things in these books, and to my critics that the bad things are not worse.