Home/Doctrine and Theology/A Companion to the Summa - Vol. III The Fullness of Life
5 of 71 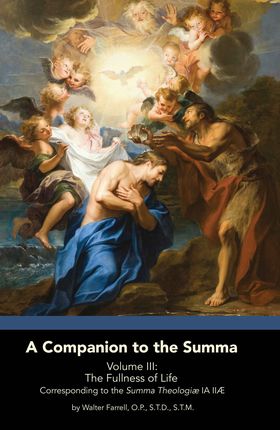 Volume Three
Originally, Fr. Farrell published Vol. Two and Vol. Three before Volumes One and Four.
Chesterton, in his Saint Thomas Aquinas, has explained both my order of publication and the title of this volume. “He (Thomas) did, with a most solid and colossal conviction, believe in Life; and in something like what Stevenson called the great theorem of the livableness of life.… The medievals had put many restrictions, and some excessive restrictions, upon the universal human hunger and even fury for life.... Never until modern thought began, did they really have to fight with men who desired to die. That horror had threatened them in Asiatic Albigensianism, but it never became normal to them—until now.” The whole second part of the Summa, covered by Vols. two and three, deals precisely with the living of human life, the invaluable meaning of that life, and the secrets of the fullest success in the living of it. This part was published first, had to be published first, because of that unholy, perverted eagerness of modern men to throw away their lives and to discard their humanity. This is St. Thomas’ superb defense of the humanity of man. The remaining volumes of this work plumb the depths and scale the heights of the unutterable truths, the mysterious beginnings and glorious goals, that interpenetrate that human life with something of divinity, the truths that are the ultimate explanations of its incredible significance.
This is not a book about the Summa, but the Summa itself reduced to popular language; and Thomas is not read in a day or a year, nor can we suffer an introduction to him, shake hands and then dismiss him from our lives. If we make the happy mistake of so much as smiling at him, he moves bag and baggage into our minds, to become an increasingly more delightful intimate as the years move on.