Home/Doctrine and Theology/A Companion to the Summa - Vol. I The Architect of the Universe
3 of 66 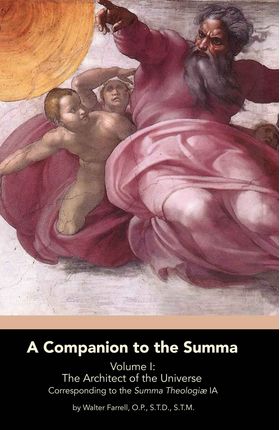 This magnificent set of four books is an exposition and guide to the entire Summa of Saint Thomas Aquinas. It was written by one of the premier Dominican Thomistic scholars who were active in the scholastic revival of the 1930s and 40s. These books contain the entire Summa transposed into modern English prose, thereby making accessible, for those who are not trained philosophers, the complete theology of Saint Thomas’s Summa.
The composition of these four books matches up perfectly with each of the 614 questions of the Summa. This book is meant to be read alongside the actual Summa in order to make it more easily understood by the average reader.
Volume One
This volume attempts to put in popular form St. Thomas’ masterly study of God, man, and the world in the Prima Pars of his Summa Theologica. His study is of extreme pertinence to our times precisely because we are the victims of a constantly increasing intellectual confusion. We have become more and more timid about digging beneath the surface of life, more and more emphatic about a knowledge of facts, less and less concerned with the wisdom of beginnings and ends. To put it baldly, we have concentrated more and more on the physical world and less and less on man and on God. The fact is, however, that exclusive concentration on a study of the world does not unearth the important truths about the world; an exclusive consideration of man and the world results in a blurred, distorted vision of both. We have tried to know only the world and remained most ignorant of it; to know only man and the world and have become entangled in a mass of meaningless detail. For the world is intelligible only in terms of man and God; man is intelligible only in terms of God; God is intelligible only in terms of Himself.