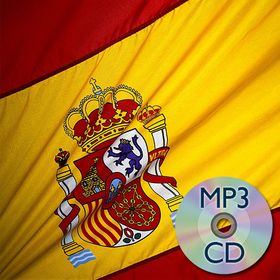 Throughout the history of Europe, there has hardly been a nation that has achieved the level of glory and Catholicity as the nation of Spain. Despite all this, one hardly hears anything about the positive effects of the Spanish nation from our modern history textbooks. Why is this?

Douglas Bersaw gives a  fascinating history of Catholic Spain from pagan Roman times until the ending of the Communist/Masonic war on Spain in the 1930's. A discussion of the 700 year "Reconquista" and a detailed analysis of the reigns of Isabella & Ferdinand, Philip II, and Charles II  (King when Spain was changed from a Hapsburg to a Bourbon dynasty), make up a good part of the course. Included are some observations on the effect of the change in dynasties and of the French Revolution on Catholic Spain. The course is wrapped up with a frank discussion of the 1936-39 "Civil War" and the importance of Generalissimo Franco.

Course consists of 28 fascinating lectures on one Mp3 CD

Includes maps of Spain and charts on the Spanish dynasties.

1.) Introduction and Course Outline
2.) Geographical Outline/ The First Centuries A.D.
3.) The Conversion of Reccarid I
4.) Spain's English Connections/ The Invasion of Islam
5.) The Christian Resurgence Against Islam
6.) The Birth of the Military Orders and the Beginning of the Crusades
7.) The Thirteenth Century and the Uprising of the Military Orders
8.) The Fourteenth Century and the Dynasty of John of Gaunt
9.) The Rulers of the Fourteenth Century
10.) The Coming of Ferdinand and Isabella, pt. 1
11.) The Spanish Inquisition
12.) The Coming of Ferdinand and Isabella, pt. 2
13.) Columbus and the Discovery of the New World
14.) Charles I: King of Spain and Holy Roman Emperor
15.) Spain and the Great Council of Trent
16.) The Ascendancy of Philip II
17.) The Balance of Power in the Sixteenth Century
18.) The Protestant Uprising
19.) Don Carlos, Don Juan, and the Battle of Lepanto
20.) The Black Legend
21.) The Sixteenth Century
22.) The Decline of Spain
23.) The War of Spanish Succession
24.) The Severing of the Power of the New World with Spain
25.) The Supression of the Jesuits
26.) Spain and the Napoleonic Era
27.) The Spanish Civil War
28.) Spain at last Crucified by the Forces of Masonry

These classes lasted between 60 minutes and 90 minutes, and for many years the time was shared by both teachers. Eventually, due to age and disability, Br. Francis ceased his travels, but he had Douglas Bersaw continue the work on his own. Due to the lack of sophisticated recording equipment and various deficiencies of the recording circumstances, the quality of all of the recordings is not perfect. Modern digital enhancement has helped somewhat to remedy this.