Home/History/EBook - A History of the Catholic Church - Vol. II - The Church and the World the Church Created
36 of 93 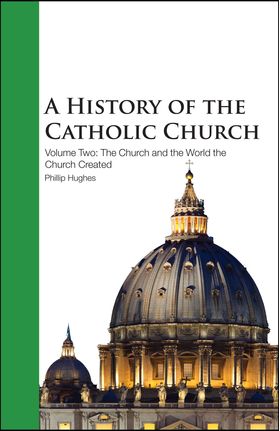 Volume Two: The Church and the World the Church Created - EBOOK - PDF

The temptation of the Church historian is to begin at the beginning and then go steadily on, the second century following the first and the third the second etc. It is a temptation that Msgr. Hughes has resisted. He has seen a better principle. The Church was born into the world, and the first phase of her history is in that world, the world that was already there. But gradually she remade that world and the second, quite different, phase of her history was in the world she had made. He divides the first two volumes accordingly. But this meant that he could not take one fixed date as the dividing line for the whole of the territory in which she worked, for the Eastern world remained very much as she found it up until the time of Justinian I, whereas the Western world had begun to respond to her re-creative activity by the time of Constantine.

The first volume, then treats of the Church in the West up to the conversion of Constantine (312) but in the East up to Justinian I—or rather a century and a half beyond to allow for the consummation of the disunion that followed Chalcedon. This second volume carries the history through to the time of St. Thomas Aquinas, while the third volume takes the story from Aquinas to Martin Luther.