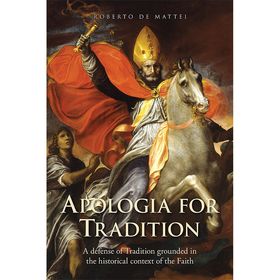 Cherish Catholic Tradition and its essential role in Christ's indefectible Church through the ages!

Apologia for Tradition is a powerful, well-documented defense of sacred Tradition as a solution for the modern crisis in the Church. This book demonstrates how the Catholics of history and today are united in a timeless battle to defend Tradition. A battle that stretches from the sands of the Colosseum to the cultural arena of today's post-Christian era. The book shows:

In the unhappy event of a conflict between the "living Magisterium" and Tradition, the primacy can be attributed to Tradition alone, for one simple reason: Tradition, which is the "living" Magisterium considered in its universality and continuity, is infallible in itself, whereas the so-called "living" Magisterium, understood as the current preaching of the ecclesiastical hierarchy, is infallible only under certain conditions. - Roberto de Mattei