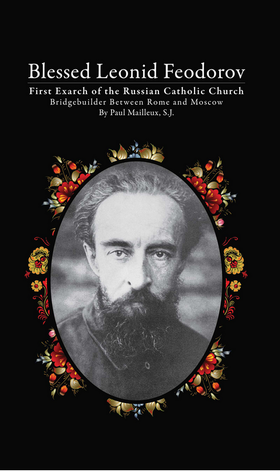 By the inscrutable designs of divine providence, during the fateful year of 1917, when Our Lady appeared at Fatima, there were two events that also occurred in Russia. The very first Catholic Exarch (a bishop approved by, and under the direct jurisdiction of, the See of Peter) for the Russian Catholic Church was named. He was Blessed Leonid Feodorov. The other event was of course the Revolution, accomplished by Kerensky and Lenin in two stages, that turned over the vast Russian Empire of the Romanovs to a clique of anti-Christian persecutors. Holy Mother Russia (and the whole world) has suffered greatly from this Revolution, and both still suffer from the scars and effects of it.

The message(s) of Fatima, given both in 1917 and in subsequent apparitions to Sr. Lucia dos Santos, show Heaven’s concern with Holy Mother Russia and her errors and her coming conversion. The conversion refers of course to the end of Russia’s first and most fundamental “error”—her separation from the One, Holy, Catholic, and Apostolic Church under the Vicar of Christ. The holy reunion that the Mother of God desires (and demands) is the perfection of the Orthodox Church of Russia that is to be accomplished by a miracle of Grace resulting from the Consecration of Russia to her Immaculate Heart by the Pope and all of the Bishops in union with Peter.

The erection of the Exarchate by Pope St. Pius X and Pope Benedict XV set the pattern for proper and fruitful reunion of the Orthodox. The holy life of the first Exarch, Blessed Leonid Feodorov (and his only successor Blessed Klymentiy Sheptytskyi, who died in 1951) established the norm that all should look to who pray and work for the successful reunion of the two Churches as Heaven wishes.

The Exarchate has been extinguished since 1951, but we believe that its resurrection is only a matter of time, and that its previous existence, and the life of Blessed Leonid, remain as divine signposts on the path of the most glorious and fruitful reunion that is to come.

Most of the information given in this biography is taken from about 300 letters and jottings written by Exarch Leonid Feodorov and other personalities mentioned in the next. About 170 of these documents were in the archives of Metropolitan Andrew Sheptitzky which are no longer available; the information was taken from accurate copies made by Prince Peter Mikholovich Volkonsky.

This biography of Exarch Leonid Feodorov, ecclesiastical leader of the Russian Catholics, is a study in heroism and the pursuit of an ideal in the midst of incredible difficulties. It presents at the same time a concrete and vital exposition of the relations between the Holy See and Russia in this century and of the conditions of religious life under the Soviets.

In order to avoid the difficulties which his change of religion would have provoked in Czarist Russia, young Leonid Feodorov, a disciple of Vladimir Soloviev, left St. Petersburg in 1902 to become a Catholic in Rome. Ordained a priest of the Byzantine rite in Constantinople, he entered a Studite monastery and became an ardent proponent of the rights and religious practices of the Eastern Churches. After the first Russian Revolution of March 1917, he was appointed head of the Russian Catholic communities with headquarters in Petrograd.

For five years, he carried on his pastoral and ecumenical activities during civil war, famine, and persecution. When, in 1922, a violent attack on all religion was begun by the Communists, he was arrested. Condemned to ten years in prison, he was released after three years at the request of Maxim Gorky’s wife. Soon rearrested, he was sent to a concentration camp on the White Sea where amid cold, hunger, and forced labor he, along with many Russian Catholics, remained faithful to their religion and its practices. After his release from the camp at Solovki, Exarch Feodorov was condemned to three more years of exile in the north. He died of exhaustion in 1935.

Despite the apparent failure of his mission, Feodorov’s influence endures in the bridge he laid between Rome and Moscow and in the appreciation he brought to the West of Russia’s spiritual heritage. His experience serves as an illuminating introduction to current problems of ecumenism between Catholics and Orthodox and as an illustration of their complexity.