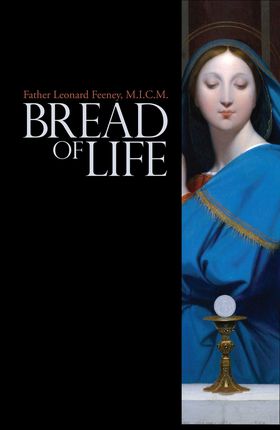 Very few American priests have been as famous or have had as much influence on the Catholic church in the 20th century as Father Leonard Feeney, (S.J.) M.I.C.M. The doctrinal firestorm that arose when he accused Archbishop Cushing of Boston of protecting and defending certain priests and teachers at Boston College who were openly denying the thrice-defined dogma that “there is no salvation outside of the Catholic church” was front page news in 1949 and is still a burning issue today seventy years later. Three years after the Boston Heresy Case burst upon the post World War world, Father’s Bread of Life was first published, and it has remained continuously in print since then.

This is the only edition since the first to appear with anything but the original text. Three articles written by loyal and ardent disciples of Father Feeney are included in order to clarify certain questions that have arisen since the original publication in 1952.

Foreward
Preface to the 2018 Edition - Br. André Marie M.I.C.M.
Fr. Leonard Feeney, Herald of Continuity - Charles Coulombe
Christmas and Salvation
The Purpose of Christ’s Coming
The Secret of the Last Gospel
The Eucharist in Four Simple Mysteries
The Great Gift of God
The Royal Requirements of Heaven
The Waters of Salvation
The Fewness of the Saved
In the Presence of God
Our Lady’s Fullness of Grace
A Plea for Courageous Catholics
The Road to Martyrdom
Appendix - Br. Thomas Mary Sennott, M.I.C.M.
Index

As the modern world continues to find itself largely lost and bewildered 100 years after Our Lady appeared at Fatima and 78 years into the atomic age, the challenge of the everlasting message of the Catholic Faith is more relevant than ever. “Oh beauty ever ancient and ever new” was the cry of Saint Augustine 1600 years ago, and this is still the same joyful utterance made by Saint Benedict Center and the Slaves of the Immaculate Heart of Mary to an unbelieving world.

Leonard Feeney was born in 1897 in Lynn, Massachusetts. In 1917, he entered the Jesuit order. His theological studies were completed at the Jesuit Woodstock College in Maryland. After a few years teaching high school, he undertook more studies at Holy Cross College in Worcester, Massachusetts. In 1927 he was sent to the Jesuits’ House of Studies in Weston, Mass., where he was ordained the following year. Before then, at Weston, his first collection of verse, In Towns and Little Towns, was published. He did three years of post graduate work at Oxford. Returning to America in 1931, he was assigned to teach at Boston College.

Here began a virtually uninterrupted profusion of literary works, poems and essays. He was named literary editor of the Jesuit Magazine America in 1936, given an office in Manhattan, employed as a preacher and retreat master, and commenced a rewarding apostolate among the blue-collar workers of the big city. He also found time to evangelize millions Sunday nights on the CBS radio’s Catholic Hour. In 1940, he returned to New England to teach theology at Weston’s House of Studies. Two years later he was introduced to Saint Benedict Center in Cambridge and was appointed by his superiors to be its spiritual director. Bread of Life was published in 1952.

After his dismissal from the Jesuit Order until his death, he was the founder and spiritual director of the Slaves of the Immaculate Heart of Mary, a religious order, comprised of men’s and women’s branches, dedicated to working for the Conversion of America. Father Feeney died and was buried on the Slaves of he Immaculate Heart of Mary property in Still River, Massachusetts, in 1978.