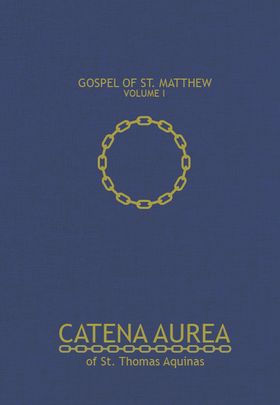 Volume I: Commentary on St. Matthew

There has never been a Catholic version of the Catena Aurea published in English until now. Using in-line citations, Douay-Rheims biblical texts, modern easy-to-read fonts, and supplying updated (including on-line source) references to original documents, Loreto has produced the first Catholic edition of the invaluable commentaries of the Fathers and Doctors collected by Saint Thomas Aquinas in the 13th century.

We have been working on this project sporadically as time permitted us for several years. This edition far surpasses all of the protestant versions available from other Catholic publishers.
Sts. Mark, Luke, John coming later this year.

Loreto Editor’s Introduction
Congratulations! You have in your hands the very first Catholic edition of the Golden Chain (Catena Aurea) of Saint Thomas Aquinas in English. This compendium of commentaries from the Fathers and Doctors of the Church was assembled by St. Thomas in the 13th century and has been a staple of Catholic biblical scholarship ever since. Originally published in Latin, it was first put into English by a group of High Anglican scholars and published by Henry Parker in London in 1842. John Henry Newman, then still an Anglican priest, wrote the Preface to that edition.
It is copies of that protestant edition that are still circulating in the Catholic world today. Loreto has never been satisfied with that edition for several reasons. First, it uses the King James version of the bible for all of it’s biblical citations. Second, it utilized a cumbersome method of placing the name of the Father or Doctor, whose work is being quoted, in the margin rather than parenthetically within the text as is done in modern book layout, and third, the footnotes and references required updating.
Our Catholic edition, which we have been working on for years, rectifies all of those shortcomings. All bible quotations are from the Catholic Douay -Rheims bible and all of the names of the Fathers and Doctors or other scholars quoted are quoted in the body of the text rather than marginally. We have also changed some of the outdated English spellings (i.e. show for shew, spoke for spake, labor for labour, etc.) and have added some footnotes and up-to-date references for those who may wish to do further research and prefer to use the internet. The original fonts used for typesetting the 1842 edition, and still reissued today by many publishers in the same format, have been replaced by a larger and more readable modern font. Except for the alterations noted, the original English text that St. John Henry Newman approved in the 1842 edition remains unchanged here.
It is of interest to note that Newman’s study of the Fathers and Doctors had no small effect upon his mind in his conversion process. At the time of the publication of the Catena Aurea, he was a leading figure in the Oxford Movement out of which came many notable conversions. Newman was received into the Catholic Church in 1845. He was canonized in 2019 and the date of his conversion, October 9, is his feast day.
Loreto Publications would like to thank those who have worked to make this edition available. In particular Meredith Wilson, Eric Kabitzke, and Michael Hamilton as well as the rest of the Loreto staff who have worked so effectively to keep this Catholic apostolate and this project moving forward.
Feast of Saint John Damascene - 2021
The Editors at Loreto Publications