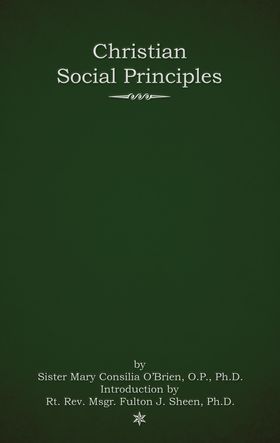 This brilliantly concieved and executed textbook was published for Catholic High School & College students. It was published in 1941 and it is still one of the clearest and succinct summaries of Catholic Social teaching. It draws primarily on the teaching of St. Thomas in the Summa and the papal encyclicals of Leo III and Pius IX. There are chapter summaries, questions for further discussion, lists of primary sources quoted, an extensive index, and suggested reading for advanced students. This is an invaluable resource for neophytes in the study of the Church's social doctrines.

Introduction
The sickness of the world is due less to a dearth of new ideas than to the
rejection of old truths. And among these old truths none has had more disastrous consequences
than the abandonment of the true nature of man. Liberalism and Collectivism, for example, are both distortions of the truth about man.
The first bred economic slaves through individual selfishness and by isolating
man from society; the second bred political slaves through collective selfishness
and by the absorption of man into society.
Somewhere between these extremes is the golden mean of the Christian
doctrine of man, that alone can serve as the foundation of a new social order.
First of all, give the true definition of liberty. Liberty is not the right to do
whatever I please, nor is liberty the necessity of doing whatever the dictator
dictates; rather liberty is the right to do what I ought. In these three words:
“please,” “must,” and “ought” are given the choices facing the modern world. Of
the three we choose “ought.”
That little word “ought” signifies that man is free. Fire must be hot, ice
must be cold, but a man ought to be good. “Ought” implies morality, that is, a
moral power distinct from a physical power. Freedom is not the power to do
anything you please, so often expressed by the modern youth as: “I can do it
if I want to, can’t I? Who will stop me?” Certainly you can do anything if you
please or want to. You can rob your neighbor, you can beat your wife, you
can stuff mattresses with old razor blades, and you can shoot your neighbor’s
chickens with a machine gun, but you ought not to do these things, because
ought implies morality, rights, and duties.
The Christian Doctrine of man furthermore affirms that you cannot have
any rights without corresponding; duties. Rights and duties are correlative like
the concave and convex sides of a saucer. I have a right to life but I have
inseparably the duty to respect the life of others. Since there are no rights
without duties then rights and duties have a social character. That is why in
Christianity, the highest expression of personality is not in the egotistic assertion
of rights but in the service of our fellowmen. Politically and economically this
implies that the “right” gives way to “role” or “function.” This is the Church’s
solution: Reconstruct society not on selfish “rights” but on the basis of function,
for, “men must be bound together not according to the position they occupy
in the labor market” (i.e., not by their income) “but according to the diverse
functions which they exercise in society.”
The difference between a society founded on rights and one founded on
function is basic. Rights, in the modern sense, are individual; functions are
social in the sense that they look to the good of all, and yet both are inseparable,
for many rights depend on functions. For example, my eye has a right to see,
but it cannot exercise that right except by recognizing its duty to remain part of
the body. So long, as the eye functions in the organism, it enjoys its rights. My
heart has the right to blood, but it cannot exercise that function unless it so
loves the conmon good of the organism as to fulfill its duty of sending blood
through all the other members of the human body. What is true of the human
order physically, is true of the social order vocationally. Capital and labor, from
this point of view, are related and made inseparable from the common good of
society. This is the foundation of social justice. Finally, the Christian doctrine
of man is intrinsically bound up with the problem of property. There are three
possible solutions of the problem of property. One is to put all the eggs into a
few baskets, which is capitalism; the other is to make an omelet out of them
so that nobody owns, which is Communism; the other is to distribute
the eggs in as many baskets as possible, which is the solution of the Catholic Church.
The right to property flows directly from my personality, and the more
intimately things are associated with my person, the more personal is my right
to them; the more they receive the impress of my rational nature, the more
they are my own. That is why writings, which are the immediate creation of a
mind, and why children, which are the immediate products of a body, are so
very much man’s own. That is why the state will protect an author by copyright
laws, and why the state recognizes that the right of education belongs to the
parents rather than to the state itself. Man’s right to have, then, follows from
his right to be himself or to his own life.

Personality thus becomes a center around which there are a number of
zones of property, some very close, some very remote; in the proximate zones
of property come our body, food, clothing, habitation, literary products,
artistic products of one’s own brain and hands, etc. In the outer zones are the
superfluities and luxuries of life. The right to own property, therefore, does
not apply equally to all things; rather the right to property varies in direct
ratio with proximity or remoteness to personality; the closer things are to our
person, the more profound the right of having; the nearer things are to our
inner responsibility, the stronger our right to ownership, as the nearer we get to
fire the greater the heat. That is why a millionaire’s right to his second million
is not at all the same kind of right as that of a poor worker to some share in
the profits, management or ownership of the industry where he labors; that,
too, is why a man’s right to a yacht is not as primary as a man’s right to a
living wage. The capitalist who invokes the right to property against the state
taxing his superfluous wealth for the sake of the needy, is not appealing to the
same basic right as that to which the farmer appeals in claiming his cows are
his own. Because property is the extension of personal responsibility, it also
follows that five shares of stock in a billion-dollar corporation is not the same
kind of property, nor is title to it as sacred as the widow’s right to five bushels of
potatoes in her backyard. In other words, the right to property is not absolute
and invariable. The right to it increases with its relatedness to personality; the
right decreases with its unrelatedness to it.
These and other applications are simply and effectively made in this needed
work of Sister Mary Consilia. Written so anyone can understand it, there will
no longer be an excuse for ignorance of those basic principles upon which the
Church reposes her social teaching. There is no incompatibility between the
social philosophy of the Church and the modern world; there is only want of
knowledge. That want this book seeks to correct. By so doing, it incidentally
re-establishes the old truth that man needs to be rediscovered, not the animal
man of whom we know so much, but the rational man of whom we know so
little. That discovery is conditioned upon knowing Him according to whose
image and likeness man was made, for only when God is relevant does man
begin to be free.
Rt. Rev. Msgr. Fulton J. Sheen,
Ph.D., D.D., L.L.D., Litt.D.