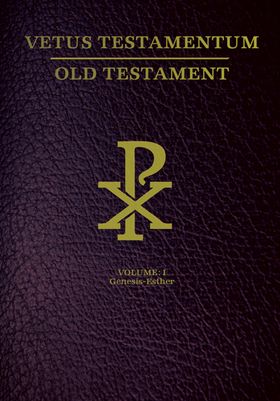 THE VULGATE IS THE OFFICIAL BIBLE OF THE CATHOLIC CHURCH

Vol. One includes the books from Genesis to Esther - 1080 pages

In keeping with the wishes of the  Holy Father, Benedict XVI, Loreto Publications has published this truly unique edition of the Bible in Latin and English. Suitable either for students of theology and the Scriptures, for those studying Latin, or just for Catholics who wish to conduct themselves according to the mind of the Church, this edition brings together two classic versions of the Bible which have served Catholics well, down through the centuries.

11    But the centurion believed the pilot and the master of the ship, more than those things which were said by Paul.
12    And whereas it was not a commodious haven to winter in, the greatest part gave counsel to sail thence, if by any means they might reach Phenice to winter there, which is a haven of Crete, looking towards the southwest and northwest.
They weather a great storm
13    And the south wind gently blowing, thinking that they had obtained their purpose, when they had loosed from Asson, they sailed close by Crete.
14    But not long after, there arose against it a tempestuous wind, called Euroaquilo.
15    And when the ship was caught, and could not bear up against the wind, giving up the ship to the winds, we were driven.
16    And running under a certain island, that is called Cauda, we had much work to come by the boat.
17    Which being taken up, they used helps, undergirding the ship, and fearing lest they should fall into the quicksands, they let down the sail yard, and so were driven.
18    And we being mightily tossed with the tempest, the next day they lightened the ship.
19    And the third day they cast out with their own hands the tackling of the ship.
20    And when neither sun nor stars appeared for many days, and no small storm lay on us, all hope of our being saved was now taken away.
Paul declares that all are to be saved
21    And after they had fasted a long time, Paul standing forth in the midst of them, said: You should indeed, O ye men, have hearkened unto me, and not have loosed from Crete, and have gained this harm and loss.
22    And now I exhort you to be of good cheer. For there shall be no loss of any man’s life among you, but only of the ship.
23    For an angel of God, whose I am, and whom I serve, stood by me this night,
24    Saying: Fear not, Paul, thou must be brought before Caesar; and behold, God hath given thee all them that sail with thee.
25    Wherefore, sirs, be of good cheer; for I believe God that it shall so be, as it hath been told me.
26    And we must come unto a certain island.
He exhorts them to take some food
27    But after the fourteenth night was come, as we were sailing in Adria, about midnight, the shipmen deemed that they discovered some country.
28    Who also sounding, found twenty fathoms; and going on a little further, they found fifteen fathoms.

29    Then fearing lest we should fall upon rough places, they cast four anchors out of the stern, and wished for the day.
30    But as the shipmen sought to fly out of the ship, having let down the boat into the sea, under color, as though they would have cast anchors out of the forepart of the ship,
31    Paul said to the centurion, and to the soldiers: Except these stay in the ship, you cannot be saved.
32    Then the soldiers cut off the ropes of the boat, and let her fall off.
33    And when it began to be light, Paul besought them all to take meat, saying: This day is the fourteenth day that you have waited, and continued fasting, taking nothing.
34    Wherefore I pray you to take some meat for your health’s sake; for there shall not an hair of the head of any of you perish.
35    And when he had said these things, taking bread, he gave thanks to God in the sight of them all; and when he had broken it, he began to eat.
36    Then were they all of better cheer, and they also took some meat.
37    And we were in all in the ship, two hundred threescore and sixteen souls.
38    And when they had eaten enough, they lightened the ship, casting the wheat into the sea.
The all escape unharmed
39    And when it was day, they knew not the land; but they discovered a certain creek that had a shore, into which they minded, if they could, to thrust in the ship.
40    And when they had taken up the anchors, they committed themselves to the sea, loosing withal the rudder bands;