Home/Devotion and Spirituality/Devotion of the Holy Rosary and Five Scapulars, The
18 of 80 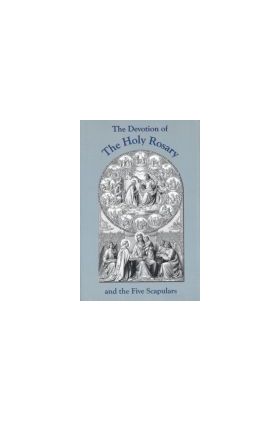 The Redemptorist Father Michael Müller had a secret weapon which won him more converts than did his indefatigable preaching and writing: the holy rosary.  This book was written as a thank you to the Mother of God for graces received. Not only does Father Müller explain what the rosary is, but what the rosary should be.  After reading this devoted author, we assure you, you will never again say the rosary mechanically, or wear the scapular apathetically.

The Holy Rosary is a gift from the Blessed Virgin Mary, as are her powerful scapulars. This is the theme Father Michael Müller stresses throughout these two hundred and seventy-five pages of grateful acclamation to a devotion upon which the salvation of great multitudes of sinners rests. The heartfelt recitation of the Rosary and meditation on the mysteries thereof is the best “thank you” we can give to Mary for her unfathomable mercies. The scholarly author expounds upon every aspect of this devotion now over eight hundred years old. He relates it wonderfully to the New Testament as well as to the Old. Every single page of this pious work is replete with holy quotations or exciting analogies, inspiring anecdotes or miracles. And, too, there are enough actual accounts of graces spurned, or false, even superstitious devotion, to make us fearful. This is a book that the faithful will love so much that they will feel compelled to share their gift with wayward friends and relatives.

Father Michael Müller, C.SS.R. was born in 1825 in Brueck, Belgium. Attracted by the zeal of the local priests of Saint Alphonsus Ligouri’s newly founded Redemptorist Congregation he entered their novitiate. At the age of twenty-eight, in 1853, he was ordained a priest by Saint John Nepomucene Neuman, the bishop of Philadelphia.

Although he had no special gift for oratory in the pulpit, Father Müller was blessed with a fire that issued through the medium of a pen. At the command of his superiors he wrote his first book: The Blessed Eucharist, Our Greatest Treasure. Müller wrote more. Thirty-five published works, to be exact. One of these was the monumental treatise called: Familiar Explanation of Christian Doctrine. It became a “best-seller” across the continent. Another book resulted from a controversy with the Paulists over his uncompromising defense of the dogma Outside the Church There Is No Salvation. Müller titled it The Catholic Dogma, which was his last testament of faith. He died on the feast of Saint Augustine, in the fiftieth year of his priesthood, in the year 1897.