Home/Philosophy/Dictionary of Scholastic Philosophy
4 of 10 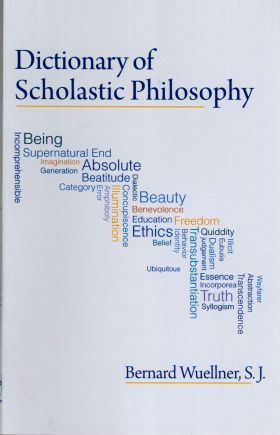 Everyone concerned with philosophy—the college undergraduate just becoming initiated into the fascinating realm of metaphysical inquiry, the interested adult anxious to grapple with questions of fundamental importance, or the busy teacher seeking to whet his student’s appetite for truth­—all will find this concise, reference book of the terms most commonly used by scholastic philosophers of remarkable value.

Arranged in dictionary form, this work contains over 1,600 entries and subentries of scholastic terms and phrases, and includes in addition over thirty charts and diagrams providing salient information on such topics as the divisions of act and potency, the kinds of appetites, the categories of being, the types of law and their relations one to the other, the powers of man, and many others.  Within an entry the sequence, in general, is as follows: term or phrase defined; its part of speech; its meaning; cross references to antonyms, synonyms, and related terms; abbreviation of the term; uses, particularly of adjectival terms; divisions of incidental terms and phrases using the main term; references; charts and diagrams.

Preference is given to the definitions of terms as found in Aristotle and Saint Thomas, but abundant attention is given to important concepts of such thinkers as Scotus and Suarez. In addition, the author has cited references to the best of modern textbooks and to the pertinent works of prominent neo-scholastics, among them Maritain and Gilson.

What renders the volume so valuable is the fact that it provides in compact form the important concepts common to scholastic thought. By giving clear-cut definitions it helps beginners avoid needless controversies and aids them to see the value of a particular philosopher’s insight into reality.  Particularly valuable for the ever growing number of individuals clamoring for the truth handed down through the philosophia perennis, Dictionary of Scholastic Philosophy will be appreciated as a basic reference work of prime importance, one which helps all students of philosophy see the relationships between the separate branches of philosophical inquiry and to appreciate the value of definitions as a requisite for the sound philosophical analysis of reality.

ISBN:
1622920007
Author:
Fr. Bernard Wuellner S.J.
Pages:
152
Binding:
Paperback
Bernard Wuellner's Dictionary of Scholastic Philosophy is a very helpful -- if not an indispensable, -- adjunct to the study of medieval metaphysics, as well as to other branches of medieval philosophy. Its companion volume, Summary of Scholastic Principles, is equally valuable.
Verified Amazon Customer 09/06/2022, 01:14 PM
Great resource for anyone who is pursuing an interest in philosophy.
Verified Amazon Customer 06/23/2022, 10:45 AM
A very useful dictionary for anyone reading Thomas Aquinas and other medieval metaphysicians.
Verified Amazon Customer 06/23/2022, 10:45 AM
Serves its purpose well. Very easy to navigate and thorough. If you don't buy this you'll have to buy something else, or spend a lot of time on google as you study Scholastic philosophy.
Verified Amazon Customer 08/27/2021, 02:50 PM
I highly recommend this book. It is fascinating and useful not only for anyone interested in scholastic or Thomistic terminology, but also for those interested in how a major school of Western thought understands and integrates key philosophical terms and concepts. It could also serve as a book to meditate with. It is refreshing to see the rigor to which thought can be put, yet without draining the vibrant life that animates it. Go for it!
Verified Amazon Customer 08/27/2021, 02:49 PM
This book is a must-have for anyone studying philosophy or theology. Not only does it have very well written definitions, it is full of amazing charts and diagrams. It was recommended to me by a theologian-philosopher PhD from Oxford, and I have found the book brilliant.
Verified Amazon Customer 08/27/2021, 02:49 PM
As advertised, this book is a dictionary of scholastic philosophy. So, it contains an alphabetical listing of the strange words common to scholastic philosophy along with the familiar words used in the strange ways to which scholastic philosophy deploys those words, usages that long predate the modern usage. "Science," for example, is "the certain intellectual knowledge of something in its causes; universal, demonstrated, organized knowledge of facts and truths and reasons or the causes of these." It is useful to haul out the dictionary when you read St. Thomas talking about "science" or "scientific" knowledge as a reminder that he is not talking about modern "science" except by analogy.

There are also various charts that neatly outline the schema of various concepts, which is very useful.