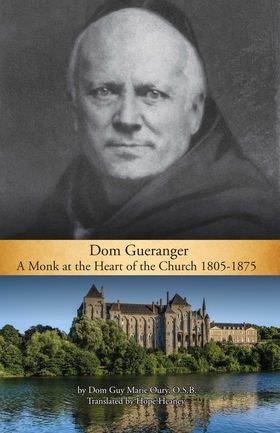 After the devastation of the French Revolution, the first abbot of Solesmes launched the ecclesial movement which invited
all Christians to experience a spiritual participation in the liturgy, “the initial source of the true Christian spirit.” Dom
Guéranger worked to instill knowledge and love for the origins of Christianity and the Church of the Fathers, thus preparing a
fertile and fruitful “return to the sources” for the entire Church.

He defined himself as “a man of the spiritual order,” opposed in every way to the naturalism of his era. It seemed to him, and
rightly so, that God’s mystery could not be treated as were the human sciences—He transcended them. Throughout his entire
life, Dom Guéranger never stopped protesting against “the diminished truths” mentioned in Psalm 11:2.

Preface
Introduction
Chapter 1: Sablé During the Empire and Restoration
Chapter 2: Adolescent Years in Angers
Chapter 3: The Seminarian from Le Mans
Chapter 4: Secretary to Bishop De La Myre-Mory
Chapter 5: A Go-it-Alone Mennaisian
Chapter 6: Administrator for the Foreign Missions Society
Chapter 7: The Three Glorious Days: the Revolution of 1830
Chapter 8: The Young Priest from Le Mans
Chapter 9: The Priory of Solesmes
Chapter 10: Seeking Candidates and Resources
Chapter 11: Final Preparations
Chapter 12: July 11, 1833
Chapter 13: A First Novitiate Under a Novice Prior
Chapter 14: Initial Projects, Initial Guests
Chapter 15: The Crisis of 1836
Chapter 16: First Trip to Rome
Chapter 17: Approval from Rome
Chapter 18: Bishop Bouvier and the Abbey of Solesmes
Chapter 19: The Young Abbot Amidst his Monks
Chapter 20: The Liturgical Institutions
Chapter 21: The Liturgical Year
Chapter 22: The Second Trip to Rome
Chapter 23: The Fortunes And Misfortunes of the Saint-Germain Priory in Paris
Chapter 24: Catastrophe
Chapter 25: Triennial Abbatial Appointment Under Episcopal Control
Chapter 26: In The Upheaval: a Father Amidst his Monks
Chapter 27: Revolution in France and in Rome
Chapter 28: Friends and Guests of the Monastery
Chapter 29: Plans for New Foundations
Chapter 30: Third Trip to Rome (1851-1852)
Chapter 31: Naturalism and Liberalism
Chapter 32: The Failure of the Acey Foundation
Chapter 33: Fourth Trip to Rome (1856)
Chapter 34: In Defense of Mysticism and Philosophical Naturalism
Chapter 35: Dom Gueranger and the English Congregation
Chapter 36: Dom Couturier and Rules for the Novitiate
Chapter 37: The Spiritual Teachings of Dom Guéranger
Chapter 38: Dom Guéranger: Spiritual Director
Chapter 39: Dom Guéranger and the Congregation of Beuron
Chapter 40: The Foundation of Marseilles
Chapter 41: The Foundation of Sainte-Cécile of Solesmes
Chapter 42: The Restoration of Gregorian Chant
Chapter 43: The First Vatican Council
Chapter 44: Solesmes in the Franco-Prussian War
Chapter 45: An Abbess for Sainte-Cécile
Chapter 46: Final Journeys
Chapter 47: The Last Road