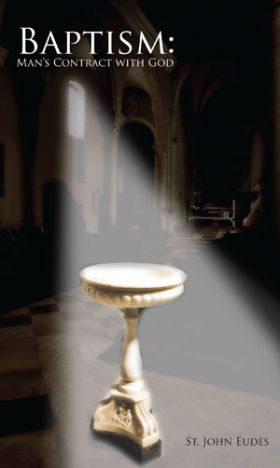 Saint John Eudes wrote many books and is best known today as the
Apostle of the Sacred Heart of Jesus and the Immaculate Heart of Mary.
In fact, he composed the masses for those feast days. One of his most
eloquent and powerful works is this treatise on baptism originally entitled,
Le contrat de l’homme avec Dieu par le Saint Baptême.

This translation was done in 1859 by Rev. J. M. Cullen and published
in Philadelphia. Over 30,000 copies were quickly sold here in the USA.
Other than spelling updating and some layout, citations, and punctuation
changes, this 2012 edition is the same as Fr. Cullen’s edition of 1859.
This treatise is one of the clearest and most lucid explanations of the
essential nature of the sacrament ever composed. Due to his Jesuit training
and his great sanctity, this saint is able to make such a clear and orderly
presentation of the effects of this solemn contract between God and his
children that it is hard to imagine anything better ever being written on
the subject.

St. John spent years with the Oratorians (founded by St. Philip Neri),
and he was also the founder of two religious orders and an experienced
missionary and preacher. He knew how to speak clearly and effectively to
both Catholics and non-Catholics. Reading this compelling presentation
of God’s great plan for us, elucidating the contract that we have entered
into by our reception of the sacrament of baptism, and the responsibility
that falls upon both God and ourselves for fulfilling our respective ends of
that contract is a source of tremendous grace to the reader.

Although not intended as a catechism on baptism, it is strongly
recommended that any teenager read it before confirmation and that any
adult convert read it before their entrance into the church, as there is
no better explanation we have ever seen of the practical (not theological)
nature and effect of baptism. Upon reading this book you will come to
a deeper understanding of why there can be no salvation outside of the
Catholic Church and without sacramental baptism.

Preface
To the Congregation of St. Bridget’s Church, Falls of Schuylkill,
Whereas, our neighborhood has lately been the theater of a somewhat angry controversy on the subject of baptism, which has been conducted with considerable eclat between two pulpits of our separated brethren; and whereas this discussion was marked by a no greater amount of charity than is usually exhibited on similar occasions, each minister setting forth his most powerful arguments for and against the sprinkling and immersion system, and, of course, using popery as his Cheshire cheese; and whereas the opprobrious epithets, applied to this most holy sacrament, became the general cant of the community, I have considered the following treatise on baptism as the most essential for you at the present time, and that it would afford most edifying instruction to the Catholic public in general.
It will, I feel confident, serve as a vessel of unction to comfort your souls, while it will also prepare you “to give an answer to every man that asketh a reason for the faith that is in you.”

It may appear like adding a vestibule to a sentry-box, to attach a preface to so small a work; yet, as it is as necessary, as it is customary, with men who invite public attention, to offer some explanatory remarks relative to the subject matter which they are about to lay before it, or in other words, to give a preface. I shall offer a few observations relative to the task, which was to me pleasing, though somewhat laborious, such as must ever be the lot of him who undertakes to transfer the thoughts and sentiments of any person from one language to another.
It is scarcely necessary to say, that this is the first appearance of the work in plain English uniform—that it has been stripped of its own French costume—and that this has not been accomplished without its own quantum of labor.

Of the real merits of the work I need say nothing, as I am sure the name of its pious and learned author, Rev. P. J. Eudes, will be a fitter recommendation than any praise which the translator might feel disposed to bestow. Still there is one fact which requires particular notice, and that is, that the work had not been published during the lifetime of the author; and, though the present edition had been afterwards corrected and enlarged, by a clergyman of the same congregation, it is, after all, without system, and the language poor, and frequently ungrammatical, whilst the thoughts stand forth like half-clad giants, that seem to terrify us by an exhibition of strength, though we are almost tempted to laugh at their nudity. Passages of scripture are paraphrased, and sometimes garbled and strung together, almost in the same sentences, without either note or reference, from the different books of the sacred scriptures, in a way which renders them almost unintelligible. I have endeavored to establish order throughout the work, and to make it clear and interesting to the reader.

In the beginning, I was of opinion that it would be too onerous a task to undertake the labor of giving direct citations of the scriptures, and noting down the chapter and verse where each passage might be found; but I soon discovered that it was necessary to do so, in order that the reader might the more easily comprehend them, and to afford him greater facility for consulting the sacred text himself. I have also added some passages of scripture, where I found the original required it.

With regard to the translation itself: of course, the difference of idiom between the two languages makes it impossible to render it wholly literal, and, in some cases, nothing more than the mere germ of the thought is retained; but, on the whole, I feel confident that it is a useful work, and will, if studied with care, do much to benefit Christian souls.

It might, of course, require a more accurate revision previous to publication; but, upon reflection, I have come to the conclusion, although I know you are not reeds to be shaken by the wind, that it should be presented to you at once, in order to counteract, as soon as possible, any disedification which the disrespectful language of others for so holy a sacrament may have occasioned you. May it realize the wishes of
Your devoted Pastor,