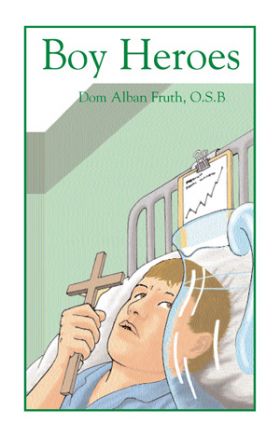 Do you want to know how to make the Heart of Jesus glad? Then listen to the stories about Tonio Martinez and Andrew de Thaye. They made their lives a song of love for both Jesus and His Blessed Mother, Mary. From their lives you too can learn how to please and love Jesus.

Only a few years ago they were still living with us on this earth. These boys, have left us a golden memory of heroic deeds done for love of God. How glad they were to receive Jesus in Holy Communion! When He sent sufferings, they accepted them with joy. They knew Jesus had said: "If any man will come after Me, let him deny himself, and take up his cross daily, and follow Me." Yes, these boys in a few short years have attained that goal which sometimes takes grown-ups a whole lifetime to reach. If you do what these boys did, Jesus will also consider you a hero.

Jesus loves little children. He wants them to visit Him and to receive Him in Holy Communion. He said: "Suffer the little children to come unto Me, and forbid them not. For of such is the kingdom of God." Go then to Jesus, and He will make your heart pure and holy, as is His own. Let Tonio and Andrew show you the way to the loving Heart of Jesus!

In the city of Santander, Spain, our little hero, Tonio, sometimes called Antonito, was born on August eighth, 1920. His mother's heart was filled with gratitude towards God for having sent this precious gift to her. She dedicated him to the Blessed Virgin, and from earliest childhood Tonio's mother taught him how good God is and how he could please Him. Even at the early age of two years the parents noticed that Tonio had unusual gifts of mind. His body, on the other hand, was weak and sickly throughout his short life of eight years.

Tonio was a bright little fellow. Just think, at the age of three he was able to read. With what delight did he study his lessons in religion! He not only was eager to know what he must do to be good, but he also looked for chances to practice what be learned. He was a little Spaniard with a great deal of life and energy. It was not always easy for him to be good. Sometimes he was tempted to be angry, but every time those bad feelings troubled him, he would chase them away and tell Jesus he wanted to be His little boy. God had given Tonio a strong will. He used it in the right way —to get rid of his faults, one by one.

Our Hero Forgives His Enemies

When Tonio was four years old, he showed that he was trying to gain control over his passions. Let us see how he did this.

One day he and his nurse returned from a walk. Instead of greeting his mother as he came into the house with a jolly, happy smile, he began to pout in a corner of the room. His curly head leaned against the wall; his eyes were full of big tears, which trickled down his cheeks. His mother tenderly embraced him, but Tonio did not want to tell her what was wrong. Then the nurse told what had happened.

The trouble was really not very serious. Tonio had been playing with some of his friends. They had been having a lot of fun until a quarrel started. One of the boys hit Tonio and shouted: "I'll soon knock your head off if you don't look out!" That was too much for Tonio. Quickly he grabbed a stone, but the nurse held back his arm and led him home. Thank God, otherwise some blood might have been shed. When Tonio heard the nurse tell the story, he could no longer control his anger.
"I don't know why he hit me; I did him no harm; I am going to get even with him the next time I see him. Just give me a chance. The first stone I find I'll let him have it. And that fool had the boldness to say that he was going to knock my head off. I'll fix him! Tomorrow, the first chance I'll get, I'll make him see stars!" Thoughts like these flashed through the feverish brain of this passionate little Spaniard.

To help him overcome his ugly temper, Tonio's mother began to stroke his fine, black, curly hair, but he permitted this only half-willingly. With gentle words his mother tried to calm his anger: "Be calm now, darling. Forget about it! Everything will be all right."
That seemed to make him feel better. His eyes began to brighten, but soon he began to weep again and more bitterly than before. "But I really don't want to get even with him. Do you know, Mamma, I would offend Jesus very much! It says in the catechism that God forgives us as we forgive those who offend us. I am sure that Jesus would be sad if I punished that boy who hurt me."

His mother drew him tenderly to her bosom and said: "Yes, darling, you must forgive him if you want to be good."
The tender hand of his mother and the love of the Savior helped him to overcome his anger. At last he said slowly: "Yes, Mamma, I am going to forgive him even if it is hard. I am going to make Jesus glad because I am doing it for love of Him."

Tonio wanted to do right, but the thought of that mean boy simply would not stay away. How hard he fought against that evil desire to get even! Finally Tonio gained the mastery over his feelings. He would never want to get even. There was still a little fear in his heart that some day his anger might get the best of him and lead him on to do things for which he would afterwards be sorry. Was he really able to keep his noble resolution? A few days later he came skipping to his mother and told her: "Mamma, today I played again with the boy who hit me a few days ago. We are good friends now. I really like him. I shall never again want to strike him."

Tonio Has a Strong Will

Tonio had more than one fault, but he tried to overcome them. When he once knew that he should not do a certain thing, he set his whole will at work to put it out of his mind. This was not easy for him. He was a fiery little Spaniard full of life and energy. Why had God given him such a strong will?