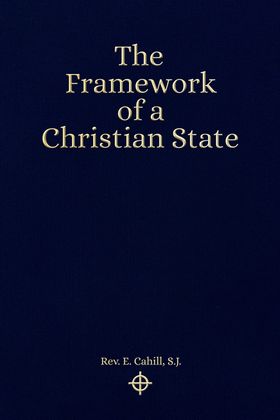 The history of the modern world, since the French-Masonic Revolution, consists in the war to defend or to destroy the very ideals of Christian civilization. God's plan for men is that all of their societal structures, especially the government of their nation-states should be imbued with Catholic principles, and that Christ would be officially recognized by the state as king and ruler of the nation, that all of the laws of each state, would not only protect the freedom of His Church to operate freely among men for their salvation, but that further, each state would pattern its laws and government according the the social principles laid out by the Church for the happiness and freedom of mankind. But in the modern age, men have uncrowned Him as their King. This uncivilized age has cried out, like the Sanhedrin of old, "We will NOT have this Man rule over us." Thus, we are now quickly regressing into a new and very dark age of barbarism (with modern technology and weapons!) such as the world has never seen before.

Fr. Edward Cahill was an Irish Jesuit who founded "an Rioghacht", a group of Catholics focussed upon bringing the principles espoused in the papal encyclical Quas Primas (on the Kingship of Christ), to the modern world. This book is his masterpiece.

PREFACE
The matter of the present book was originally prepared in connection with the writer's duties as Professor of Social Science in Milltown Park, Dublin. The greater part of it has been already published in the Irish Ecclesiastical Record and the Irish Month.ly between the years 1924 and 1930. The same matter has formed the basis of a series of lectures (of which summaries have appeared weekly in the Irish Catholic) which the writer has been giving to the Central Branch of An Rioghacht since the foundation of that association in 1926.(1) Grateful acknowledgments are due to the editors of the Irish Ecclesiastical Record and the Irish Monthly for their kind permission to republish in their present form the articles which appeared in these reviews.
The book is intended primarily for students of Social Science who accept the Church's teaching. Its main purpose is to summarise and present in a consecutive and more or less scientific form the main elements of the teachings of the Roman Pontiffs (especially Leo XIII and our present Holy Father Pius XI), the Catholic Bishops and the standard Catholic authors on questions connected with social organ­isation and public life, including such topics as personal rights and duties, the privileges and position of the family in the social organism, the interrelations of capital and labour, the place of religion in public life, education, the functions of the State, its constitution, laws and adminis­tration, the due interrelations of its component parts with one another, its relations with the Church, etc.
Here and there in the book will be found suggestions borrowed mostly from approved Catholic writers, as to practical means of realising Christian principles and ideals in social and civic organisation. The principal non-Catholic theories on tho subjects discussed, and modern non-Christian tendencies and movements are also dealt with ; and tho well-being of the people under the Christian regime as illustrated from history is compared with their position in the non-Christian State.
Following the precedent of French, American and English writers on the same subjects, the author has striven to give special prominence to those aspects of the questions dealt with, which seem to have special importance in his own country ; and he naturally chooses his illustrations of p1inciples and their application from existing circumstances in Ireland, the country with which he is most familiar. The main portions of the work, however, apply to all countries. Hence the writer hopes that the book may prove useful even to non-Irish readers. On that account he has relegated to Appendices the treatment of certain aspects of the social question which are rooted in historical causes peculiar to Ireland.
The writer wishes to thank very sincerely the kind friends whose invaluable assistance and patient collaboration have enabled him to complete much sooner than he could other­wise have hoped the tedious work of preparing the book for publication. He wishes also to thank those other friends whose helpful advice and friendly criticism have assisted him very much in the work of revision. Finally, he gladly acknowledges the great assistance he has received from the discussions carried on during the past five years at the meetings of An Rioghacht. These discussions have served especially to throw light on many practical questions, and have given the writer an insight into certain aspects of his subject with which he would be otherwise un­acquainted. Fr. Edw. Cahil S.J. Milltown Park, Dublin - Feast of Christ the King 1931
1 An Rioghacht (the League of the Kingship of Christ) was founded in Dublin, October 31, 1926, on the occasion of the first celebration of the Feast of Jesus Christ the King. Its objects are the study and propagation of Catholic social principles and the promotion of Catholic Action.