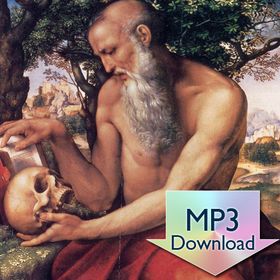 Gen. José Millan-Astray, a great Catholic general of the Spanish Civil War, provided his men with the motto and battle cry of “Long Live Death!”.

Gary took this motto as title of his talk because death is to many a thing to be feared and to be held back by any means necessary. Our death is something we must all face as the inevitable end of this temporal life which God gave us. The Christian should embrace death without fear.  But why talk about it?  Because the new experiments attacking human life such as research projects using human stem cells, test tube babies, clones...all of which are leading to a total loss of respect for human life, even though these tests are supposedly performed to find ways to prolong life or in fact preserve it forever are issues that we must face. Scientists are now saying by their actions that God made mistakes in creating us...that we are not meant to die and that we are now better than God... or will be once we can create a species that will not die. This talk can both fascinate you and caution you all at once about the new science.  It is a moral issue about which we should be well-informed since our liberal media and medical professionals usually fail to tell the truth on these matters and often glorify those responsible for some of the most outrageous crimes against humanity.

Recorded at the 2001 Saint Joseph Forum