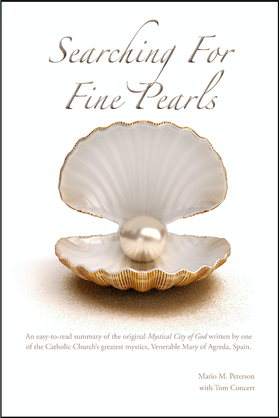 Searching for Fine Pearls is an easy-to-read summary of the monumental Catholic classic The Mystical City of God that was written by Venerable Mary of Agreda, a 17th century Franciscan abbess, who had mystical visions and revelations concerning many intimate details of the life of our Lord and his Blessed Mother not revealed in the Gospels. These revelations were described and published in four volumes, in Spanish, during her lifetime.

For those readers who might be daunted by the thought of reading the full work of over 2,000 pages, this short summary may encourage them to make the effort. Many saints, popes, religious, and other holy men and women, as well as humble laymen from all walks of life have found great grace and consolation in the pages of The Mystical City of God.

This work has received the approbation of seven popes and has been read and meditated upon by millions in the four centuries since its original publication. An English translation was produced in 1912 and has enjoyed a wide readership.
Mary of Agreda’s incorrupt remains and the well documented facts of her evangelizing bilocations to the New World attest to her holy life. Fray Junipero Serra, the founder of so many of the famous California missions, and a brilliant scholar and theologian, was profoundly influenced by her inspirational writings. He always carried with him three books; his breviary, a copy of the bible, and The Mystical City of God.

Approbations by Seven Popes
1. Pope Innocent XI, (pope 1676 to 1689), on Nov. 9, 1681, stayed the execution of a Prohibitive Decree by the Holy Office on the Mystical City of God, (which was based on a French mistranslation and Jansenist objections to the work’s doctrine of the Immaculate Conception), then on  July 3, 1686 issued a breve permitting the publication and reading of the Mystical City of God … (Mistica Cuidad de Dios).
2. Pope Alexander VIII, (pope 1689-1691) … said “These books may be read by everybody with impunity.” The original document recording this oral decree is in the Archives of the Congregation of Rites
3. Pope Clement XI (pope 1700-1721)… prohibited The City of God from being placed on the Index, and in two decrees of June 5,1705, and September 26,1713, declared it could be read by all the faithful.
4. Pope Benedict XIII (pope 1724-1730)… signed a decree of the Sacred Congregation of Rites stating: “It is ordered that the cause of the above-mentioned servant of God shall be continued before the holy Congregation of Rites without further examination of the Cite Mystique, and these books can be retained and read. March 14,1729.
5. Pope Benedict XIV (pope 1740-1758)… confirmed the authenticity of authorship by Venerable Mary of Agreda  and considered the 2nd writing “miraculous” per Magnum Bullarium Romanum
6. Pope Clement XIV(pope 1769-1774) … also confirmed the authenticity of authorship by Venerable Mary of Agreda,
7. Pope Pius XI, (pope 1922-1939)April 29, 1929, granted an Apostolic Benediction to all readers and promoters of the Mystical City of God.