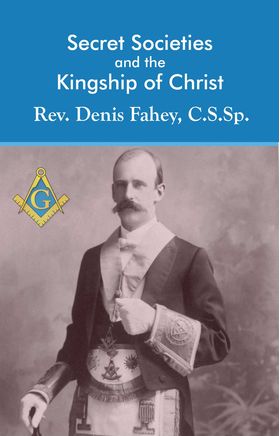 Secret Societies and the Kingship of Christ is a collection of twelve articles that were written by Fr. Fahey and published in The Catholic Bulletin in 1928, the year after he published his first book Mental Prayer According to the Principles of Saint Thomas. Fr. Fahey’s formative educational years coincided with the pontificate of  that implacable foe of modernism, St. Pius X , the successor of Leo XIII who had spoken out so stridently against the sect of Freemasonry and naturalism. Attentive to the needs of the Church in his time, Fr. Fahey followed the Leonine instructions given in Humanum Genus article 31;  “We wish it to be your rule first of all to tear away the mask from Freemasonry, and to let it be seen as it really is…”
This book is a short, but thoroughly researched and footnoted introduction the the subject of Secret Societies and their impact on the Church, Christian civilization, and modern history.