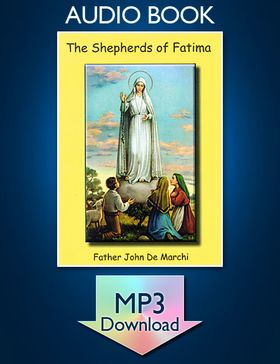 In Heaven, where they know what is really important, they marvel that we make such a fuss about the atom bomb and are so little excited about our Lady’s coming to Fatima – easily seen, in heaven, at least, as the most tremendous event of the century. God, who reveals to babies what he conceals from the wise, sent first an angel and then his Mother to speak to three Portuguese shepherd children as poor and unlearned as those shepherds at Bethlehem who once saw angels and then found our Lady and her Child. The visions came to children, our Lady’s messages for the whole grown-up world were entrusted to children: children, then, have the first and best right to hear all about it, the best chance of understanding what our Lady wants and of cooperating with her in helping our miserable old world, so sadly mismanaged by grown-ups.

Father De Marchi knows Fatima; you might call him an expert on all that happened there. He has visited with Lucia, knows the parents of Francisco and Jacinta and he tells the story here almost as freshly and delightfully as though he were a child himself. The book is not meant just for small children or just for big children. Ten and twelve year-olds will not feel that it is too young for them, six and seven year-olds will understand it very well if it is read to them. In fact, it is one of those rare books that is at its very best when an older child or a grown-up reads aloud to the whole family. No more enthralling story was ever told, nothing so exciting has been imagined by tellers of tales – and this story is true!