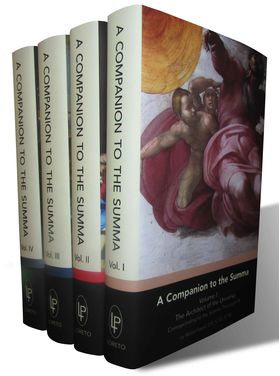 This magnificent set of four books is an exposition and guide to the entire Summa of Saint Thomas Aquinas. It was written by one of the premier Dominican Thomistic scholars who were active in the scholastic revival of the 1930s and 40s. These books contain the entire Summa transposed into modern English prose, thereby making accessible, for those who are not trained philosophers, the complete theology of Saint Thomas’s Summa.
The composition of these four books matches up perfectly with each of the 614 questions of the Summa. This book is meant to be read alongside the actual Summa in order to make it more easily understood by the average reader.

Volume One - The Architect of the Universe - 408 pages

FOREWORD
This first volume of a set of four, unlike most first volumes, does not come as a stranger into a strange world. Through a variety of circumstances, Volumes II and III were born before their time. Of course it was necessary in them to explain that this whole set of books took its rise from a series of lectures on the Summa Theologica of St. Thomas Aquinas; that the double purpose of the whole work is an introduction to Thomas and a defense of the truths, natural and divine, by which human life is lived; and that these books are the Summa reduced to popular language, the parallel questions of the Summa being indicated under each chapter heading.
There is no need to go into all that again. Nevertheless, an introductory note to this volume is necessary, for each of the four books has its own immediate and special purpose. Volume II, for example, furnished the key to human life and human action; Volume III concentrated on the manner of the living of human life in its exuberant fullness. This volume is the wise man’s search for the ultimate answers that are the bedrock far beneath human life, human action and the living of human life.
This volume attempts to put in popular form St. Thomas’ masterly study of God, man, and the world in the Prima Pars of his Summa Theologica. His study is of extreme pertinence to our times precisely because we are the victims of a constantly increasing intellectual confusion. We have become more and more timid about digging beneath the surface of life, more and more emphatic about a knowledge of facts, less and less concerned with the wisdom of beginnings and ends. To put it baldly, we have concentrated more and more on the physical world and less and less on man and on God. The fact is, however, that exclusive concentration on a study of the world does not unearth the important truths about the world; an exclusive consideration of man and the world results in a blurred, distorted vision of both. We have tried to know only the world and remained most ignorant of it; to know only man and the world and have become entangled in a mass of meaningless detail. For the world is intelligible only in terms of man and God; man is intelligible only in terms of God; God is intelligible only in terms of Himself.
Thomas does not, of course, attempt to amass all the detailed knowledge that has been gathered by the ages. He does attempt, as deeply as is given to the human mind, strengthened and illumined by divine help, to plumb the uttermost depths of truth. It is not surprising, then, that the reader will more than once or twice discover that such a study is not easy. But man was not made for easy things; he was made for hard things, almost insuperably hard things—a truth that intrudes itself on the mind of man in its every contact with the crucial things of life.
This study involves one of those crucial activities, for it centers around indispensable knowledge. Plainly it is important for every man to know about the world, at least the primely important things like its origin, its meaning, its relation to himself; after all, he must live in the world, do something with it, and have something done to himself by it. It is of the utmost importance that a man know about himself, at least the important things like his origin, the meaning of his life, and his relations to things beneath and above himself; for he has the unique gift of being able to use his life to some purpose, a purpose of immediate concern to the individual man. Unless a man knows about God, he cannot know the important things about either the world or himself.
When we go below the surface of a man’s life to the spiritual depths beneath, the image of God stands out more clearly; then we begin to appreciate the servile place of the world, the inestimable dignity of man and the eternal promise which, crowning his life, dwarfs everything else in the universe. Thomas’ study, in a word, is important for our times because the men of our times have learned all but the important things. His study of God, man, and the world, hard and deep as it may be, is necessary because, forgetting God, our times have not recognized men and have yet to see the world. We are learned, but far from wise. This is Thomas’ book of wisdom, his searching examination of the profound reasons, his handbook of the important answers.
This is a beginner’s book in a much more literal sense than is the Summa Theologica, explicit as Thomas was in aiming his book at beginners. To the angels, it must seem like a primer; yet men are not angels but always beginners in the way of wisdom. From those human beginners I ask pardon for all the difficulties I fail to remove from their path to wisdom. To the particularly ruthless critics who insisted on the removal of so many of those impediments, I give my sincere thanks. To Thomas, my acknowledgment of all the good things that are in this book.
W. F. Dominican House of Studies Washington, D. C.