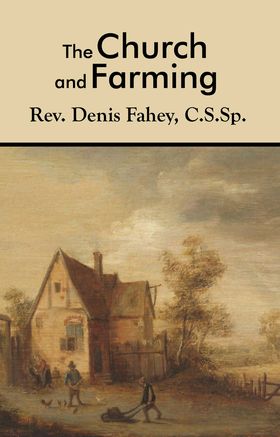 This is the last book published before Fr. Fahey’s death. It is an enduring testament to his love of the land and his firm belief that the best setting for most Catholic living is the family farm or small business, similar to the life lived by the Holy Family of Nazareth.
The Church is greatly interested in farming because it is the most fundamental of all human occupations. Those who work the land are deeply immersed in, and must work in harmony with, the natural rhythms and processes of God’s creative handiwork. The harmony and balance of rural life are profoundly upset by industrialized living, both on and off the land. Father delves into many spiritual, chemical, technical, and scientific questions pertaining to the future of farming and the life of the Church and all human society, which depends completely on the land for its existence and prosperity.

Allocution of His Holiness, Pope Pius XII                                            11
To the Italian Farmers’ Federation, On the Occasion of Their National Congress in Rome, 15th November, 1946, Particular Pleasure of His Holiness on this Occasion—Importance of Family Life of the Countryside—Characteristics of Genuine Rural Civilization—Family Farming—Lack of Right Ideals—Magnitude of the Task that Confronts Farmers—Reason for Opposition Between City and Country—Work Considered as Fulfilment of Function by Members of Christ.

Part II
Reflections on Rural and Other Problems

In his touching Christmas Radio Message, 1949, for the opening of the Holy Year, Pope Pius XII said: “May this Jubilee be the year of the great return of all mankind to the Divine Plan for Order! As the modern world has tried to shake off the sweet yoke of God, so it has rejected along with it the order He has established, and, with the self-same pride that moved the rebel angel at the beginning of creation, has pretended to set up another of its own choosing. After almost two centuries of sorry experiences and wanderings, those who are still sincere and honest admit that plans and impositions of this sort, which bear the name but lack the substance of order, have not yielded their promised fruit. …For man’s true nature as a creature having his origin and destiny in God, there has been substituted the false picture of man with conscience a law unto itself, man his own legislator brooking no control, with no responsibility towards his fellow men and the community, with no destiny beyond earth, no purpose other than the enjoyment of transitory things, no rule of life except that of the fait accompli and the unbridled satisfaction of his desires.”