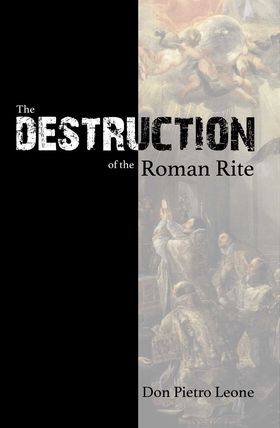 Don Pietro Leone is the author of this most useful summary of the history of the destruction of the Roman rite and the substitution of a modern rite called the Novus ordo (new order) in its place. In his General Audience of November 9, 1969, Pope Paul VI had this to say (among many other things) about substitution of the new rite for the Roman rite of all times: “This change has something astonishing about it, something extraordinary. This is because the Mass is regarded as the traditional and untouchable expression of our religious worship and the authenticity of our faith.”

No truer words were ever spoken by a pontiff, except perhaps by the high priest who once said: “You know nothing. Neither do you consider that it is expedient for you that one man should die for the sins of the people and that the whole nation perish not.”
Some, upon contemplating these extraordinary changes, go so far as to think that the attempts of the Church’s enemies to eradicate once and for all “Popish superstition” from the world have made significant progress towards their goal when the Pope himself allowed the introduction of, in his own words, “a new rite” into the heart of the Church. Others seek to understand God’s will in these matters and consider that these changes and the resulting chaos in the life of the Church might be among those vague “chastisements” mentioned by Our Lady at Fatima. Still other observers of the Church in the latter half of the 20th Century and into the third millennium believe that the new mass is a great development of human progress and is the harbinger of a new “springtime” in the life of the Mystical Body, while yet others, many of the lay-faithful, struggle to maintain their faith and to live the life of faith somewhat passively in a spirit of docility in the face of the radical changes in liturgy and the life of the Church. Countless others have just dropped out of the daily life of the Church altogether.

There is no question that the new rite has changed the Church. This little book seeks to serve as a scholarly and objective summation of the changes and their effects. The substance of the work is taken largely from the mouths of those who were responsible for promoting and producing the changes as well as from several lengthy and scholarly books published by those who oppose them.

Preface
Historical Introduction
I: Catholicism and Protestantism
A. In Official Church Documents
1. The Old Rite
2. The New Rite
B. In the Rites Themselves
1. The Offertory
2. The Canon
i. The Eucharistic Prayers
ii. Silence
iii. The Formula of Consecration
3. The Real Presence
4. The Sacramental Priesthood
5. The Ends of the Mass
6. Latin
7. The Orientation of the Celebrant
8. Altar and Table
9. Intelligibility and Participation
10. The Church
C. Public Testimonies
1. Catholic Testimonies
2. Protestant Testimonies
D. An Ecumenical Motivation
II: The Cult of God and the Cult of Man
A. General Comparison
1. The Orientation of the Celebrant
2. Gravity
3. The Sacred
4. The Rubrics
5. A Perfect Work
6. Contemplation and Devotion
B. Comparison of the Propers
1. The Collects
2. The Gospels and Epistles
i. The Gospels
ii. The Epistles
C. Mistranslations
D. Motivation: Rapprochement with the World
Conclusion
Epilogue

The liberalization of the Old Roman Rite by the Supreme Pontiff in September 2007 has stimulated a variety of reactions. Polemicists on the side of modernity have labelled it as “something for nostalgics” or as incomprehensible and therefore to be rejected; while polemicists on the side of Tradition have labelled the New Rite (as they always had) as invalid or sacrilegious.

Pacifists, by contrast, have either attributed the preference for one rite or the other to “sensibility” alone, or have ascribed an equal value to both rites, speaking for example of “respective strengths”, such as a greater “verticality” in the Old Rite and a wider range of readings in the New. If such persons have any reservations concerning the New Rite, they claim that it suffices to celebrate it well and reverently.
To this background, the present essay aims to evaluate the two rites scientifically: more precisely to compare them in regard to their theology of the Mass. In so doing, it seeks neither to make peace nor war, but simply to establish the truth, by examining the relevant facts and drawing the necessary conclusions.

The essay consists in large part of a synthesis, a re-ordering, and in the second part a certain development, of the relevant material taken from the book Pope Paul’s New Mass by Michael Davies. It relies greatly on the Critical Study of the Novus Ordo Missae by Cardinals Ottaviani and Bacci, on Work of Human Hands (hereinafter referred to as “WHH”) by Father Anthony Cekada and on the later studies made by Una Voce and by Lorenzo Bianchi (op.cit.) on the changes to the Propers.

I write this brief note to avert readers of the publication of the definitive English version of the book thus entitled by Loreto Publications, now available on ‘Amazon’. Readers may remember having read it in installments on Rorate Caeli some years ago.

I was inspired to write this book on reading ‘Pope Paul’s New Mass’ by Michael Davies, with all the depth, clarity, logical coherence, and scintillating wit characteristic of that great man - whom I was also happy to have known personally.  I combined this material with a synthesis of other important works on the topic: the critique of Cardinals Ottaviani and Bacci, a study on the readings by the German ‘Una Voce Korrespondenz’, a brief but important analysis of some of the propers by Lorenzo Bianchi, and ‘The Work of Human Hands’ by Fr. Anthony Cekada.

This last book, the fruit of 30 years of study, is remarkable for its scholarship and breadth of source material, as also for its mordant humour. It reveals a background similar to that which Professor de Mattei describes in ‘The Second Vatican Council, a Story Never Written’ - a background of ignorance, worldliness, superficiality, dishonesty and heresy.  The background to the preparation of the Mass texts contrasts with that of the Conciliar texts principally in respect to the chaos of the former and to the discipline of the latter. I am grateful to a French priest friend for a number of important quotations and insights, the fruit, this time, of no less than 40 years of study.

My intention, as I wrote in the book in question, is neither to make war nor peace, but simply to make a clear and concise synthesis of the facts as they are, and to draw the necessary conclusions - one of the most notable being the involvement of the Devil in this vast and utterly appalling work of destruction.

The book falls into two main parts: the first on the Protestantism of the Mass, the second on its Anthropocentrism. In the former I attempt to show how the principal changes adduced to the rite of Mass were all anticipated by the Heretics Martin Luther and Thomas Cranmer, and how they all militate, in one way or another, against the dogma of the sacrificial nature of the Holy Mass. In the latter I attempt to go deeper and show how the same changes, as well as others, are anthropocentric in character. This is in fact already evident in the fact that the essence of Lutheranism, Protestantism, as indeed of all heresy and sin, is egoism, which, in the theological context, amounts to anthropocentrism: the exaltation of man in the place of God.

The Second Person of the Most Holy Trinity assumed human nature in order to suffer: ultimately in order to accomplish the Holy Sacrifice of Mount Calvary. The denial of the sacrificial nature of the Mass may therefore be understood as an attack on His Most Sacred Humanity. The Anthropocentrism of the New Mass, by contrast, may in its turn be understood as an attack on His Divinity. Combining these two elements, we can see the destruction of the Old Rite together with the creation of the New as an attack on Our Blessed Lord Himself: both in His Humanity and His Divinity. That that is also the deepest meaning of the liturgical revolution is clear, in virtue of the fact that what lends a thing its deepest meaning is its relation to God.

May this short book serve to enlighten the faithful concerning a matter which touches us all and to enkindle in them a more profound knowledge and love of Our Blessed Lord in the Sacrifice of His Thrice-Holy Love; May it hasten the universal return of the only Rite known as ‘Roman’ that is worthy of the name, that is worthy of God, of His Crucified Love for man, and of Our Holy Mother the Church: to His eternal glory and to the sanctification of the elect. Amen.

Author:
Don Pietro Leone
Pages:
122
Binding:
Paperback
Enjoyed very much so.
v 06/23/2022, 10:20 AM
Excellent explanation of damage done to the faithful by the loss of their patrimony.
Verified Amazon Customer 08/27/2021, 01:10 PM
A really good read. Easy to understand (for those of us who are not intellectuals, but desire to have the situation explained) The book explains the the order of the worrying changes which have taken place within the Catholic Church and its effects, since the 1950's. Would highly recommend.
Verified Amazon Customer 08/27/2021, 01:10 PM
Write a review