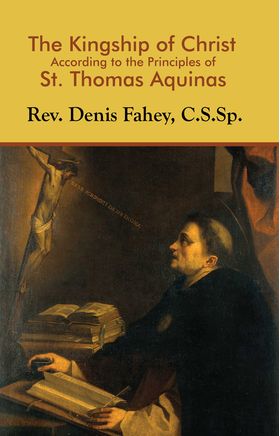 Author:
Father Denis Fahey
Pages:
128
Binding:
Paperback
This is one of the first full length books from the learned mind of Father Denis Fahey. Now, Father Fahey was uniquely positioned to hold forth on such subjects as the Kingship of Christ According to the Principles of Saint Thomas Aquinas, as he was trained in history, political economy, and scholastic philosophy. And the evidence of the importance of all three discpilines in forming the wonderful mind of this great Christian expositor is demonstrated throughout this very important book.

Father Fahey completed this book in 1931 during that very important, yet little understood time between the first two world wars. He wrote then at a time when Europe had been rent asunder, and the world's economies were on the way to collapse. But exogenous of these factors, Father Fahey renders herein an account of the importance of the Kingship of Christ, and the insidious forces that inveigh against It, that is truly timeless.

The writing is beautiful, learned, and insightful. I strongly encourage Catholics and all other truths seekers to read this very important book, now brought into attractive new format by the folks at the Christian Book Club of America. God bless.
Verified Amazon Customer 08/27/2021, 02:16 PM
Write a review