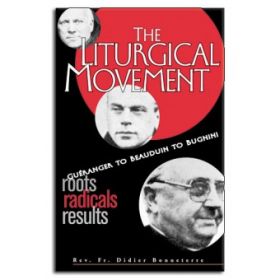 Historically Dom Gueranger and Pope Saint Pius X are truly at the origin of the liturgical movement, that is, "the renewal of fervor for the liturgy among the clergy and the faithful." But it is a false and pernicious claim that there has been a "homogenous development" in the movement begun by them resulting in the New Order of Mass!

This deception cannot be accepted. That is why this book was written. The Novus Ordo derived from the thought of Dom Gueranger and Pope Saint Pius X?! No way!

The Liturgical Movement is a fast-reading book on the history of the liturgical movement of the last century:

-How was it diverted from its course?
-Who made up the brain-trust which led its early deviation?
-What was the principal error of these liturgical radicals?
-In the end, who hijacked the movement to propagandize for Vatican II and a New Mass?

The Liturgical Movement shows that since before Vatican II, the New Mass had already been conceived - the poisoned fruit of the perversions of the liturgical movement. How did the magnificent first-fruits of this great enterprise, which could have brought so much good to the Church, go so awfully bad?

Far from being negative, The Liturgical Movement helps us to know what to reject and what we must carefully conserve of the liturgical movement, above all for those who work for the maintenance of the Catholic liturgy as heirs and successors of the work of Dom Gueranger and Pope Saint Pius X.