Home/All Products/The Mystical Body of Christ and the Reorganization of Society - EBOOK as PDF, EPUB, or Kindle
293 of 338 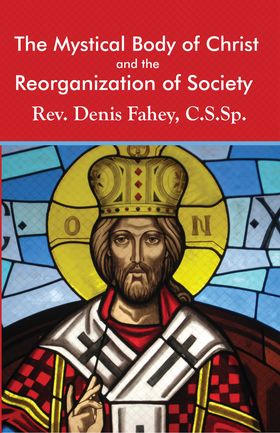 Originally published in 1945, just eight years before his death, this is Fr. Fahey’s magnum opus. All of his written work is centered around the Kingship of Christ and his right to rule over all human societies and governments. Just as we daily pray that God’s will be done ON EARTH as it is in heaven, it follows that all human works, especially the government of all of our human societies (the family, the state, the Church in her human aspects) must conform to God’s will and not He to ours.
This book details the Rights of God in human governments. He has the RIGHT to be obeyed, even by the state. This book proposes the RE-organization of society according to God’s will for us on earth and within the context of the Mystical Body of Christ. Human governments will only be as good as they can be in this fallen world insofar as they conform to God’s Divine Plan for Order in establishing and running society. Here is that plan as laid out by God and his Church and explained by Fr. Fahey. Only when man puts God’s Rights first, will there be any hope of Human Rights being respected or upheld.

Mental Prayer According to the Teaching of Saint Thomas Aquinas (1927)
* The Kingship of Christ According to the Principles of Saint Thomas Aquinas (1931)
* The Social Rights of Our Divine Lord Jesus Christ the King (1932) Adapted from the French of Rev. A. Phillippe C.SS.R. by Fr. Denis Fahey C.S.Sr.
The Mystical Body of Christ in the Modern World (1935)
* The Rulers of Russia (1938)
* The Workingmen’s Guilds of the Middle Ages (1943) (A translation of the work by Dr. Godefroid Kurth C.S.G.)
* The Kingship of Christ and Organized Naturalism (1943)
* Money Manipulation and the Social Order (1944)
* The Mystical Body of Christ and the Reorganization of Society (1945)
* The Tragedy of James Connolly (1947)
* The Rulers of Russia and the Russian Farmers (1948)
* The Kingship of Christ and the Conversion of the Jewish Nation (1953)
* The Church and Farming (1953)
Secret Societies and the Kingship of Christ
* Currently available from Loreto

Loreto’s editions of the works of Father Fahey have been newly typeset and updated with some changes to the original text. The alterations are as follows:
1. We have changed the spelling of many words to match modern American spelling rules. Some examples are: neighbor for neighbour, show for shew, labor for labour, realize for realise, mold for mould, program for programme, etc.
2. We have made use of current punctuation and capitalization rubrics.
3. We have made a few minor corrections of typographical errors in the original texts but have NOT altered the words of Fr. Fahey nor made any deletions.
4. We have made uniform the notations of scripture references in the currently accepted fashion. For example, we use Mt. 24: 6–9 instead of Matt. xxiv 6, 7, 8, 9.

Part I: The Mystical Body of Christ
and the Divine Plan for Order

Chapter I: The Mystical Body of Christ 1
god is subsistent love of order • god’s unchanging purpose • naturalism and our supernatural life • social organization and the individual member of society • human personality and individuality • personality, individuality and the common good • appendix: social justice

Chapter IV: Program of Integral Acceptance of the
Kingship of Christ 109
social or practical modernism • social acceptance of the divine plan • acknowledgment of the spiritual kingship of the church’s rulers • duty of states towards religious orders and congregations • the duty of states with regard to secret societies • acknowledgment of the dignity of christian marriage • recognition of education as the formation of members of christ • solidarity of the mystical body reflected in economic organization • money is an instrument of economics • what is meant by liberalism? • the return to the gospel • the church’s program for the rights of god • appendix: pope benedict xv’s peace proposals, august 1, 1917

Part II: The Organized Opposition
to the Mystical Body of Christ
and to the Divine Plan for Order

Chapter VI: The Organized Opposition to the Mystical
Body of Christ 175

Part III: Ockhamism or Nominalism
and Political and Economic Decay

Chapter XIII: The Protestant Revolt Against Order 343
the preparation of wrong national decisions • decay in the intellectual grasp of order • weakening of the will through the decay of the virtue luther and ockhamism • consequents of lutheranism

Part V: Economic Decay and the
Divine Plan for Order

Chapter XVII: Some Aspects of Economic Decay 501
the english revolution of 1688 and the bank of england • the jews and william of orange’s expedition to england • the bank of england, locke, and freemasonry • defective principles adopted by the bank of england with regard to the issue of money, berkeley’s rediscovery of some sane principles concerning money • french economic life sacrificed in order to eliminate membership of christ: (a) frederick the great and the french revolution; (b) bismarck and gambetta; (c) the attack on the christian family by divorce; (d) financial cost of eliminating membership of christ from french schools; (e) legalized robbery under false pretences; (f) the warning of the great war unheeded • appendix: cardinal pie of poitiers and napoleon iii

Chapter XXI: The Principles of St. Thomas Aquinas
and Monetary Reform 673
general principles • national monetary reform: (a) abandonment of the domestic gold standard: (b) issuing of lawful exchange-medium by state; (c) lending of lawful exchange-medium by banking guild; (d) stability of price level; (e) concluding remarks on national monetary reform • international trade and money: (a) the bank for international settlements and international trade; (b) international planning and the gold standard: (c) proposed reform of monetary system in view of international trade • international economic code • appendix: pope pius xii’s five peace points, pope pius xii’s allocution, christmas. 1941; the five essentials of a new order • some extracts from pope pius xii’s allocution, christmas, 1942: dignity and rights of the human person; the sense of social unity and especially of the family; dignity and prerogatives of labor; restoration of the rule of law; conception of the state according to the christian spirit