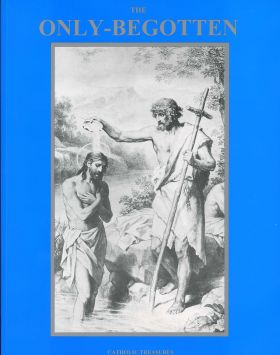 In a very well-reasoned book, Michael Malone brings our attention to a number of learned authorities who teach that Our Lady was indeed baptized. He makes a very well-argued and logical case for this to have been, and further to have been necessary. Such an apparently outrageous claim! I have never considered such a possibility ~ that the Immaculately-Conceived Virgin Mother of God should have been baptized ... but out of necessity?

Only a fool or a person of ill-will can deny that the Catholic Church today is in the midst of an unprecedented crisis and universal decline. Perhaps the chief reason for this is the utter collapse of the spirit of mission over the last thirty years. This, in my view, has been caused by "forgetting" the Dogma that outside the Church there is no salvation and its replacement with the obsession of an "Ecumenism" that would have us believe that all religions are an equally efficacious means of salvation. Whatever we might think about the theological accuracy of his case ~ and, to negate it would, I submit, prove difficult ~ Michael Malone reveals his utter Catholicity. Congratulations on a most stimulating book!
Fr. Timothy Hopkins Shrine of St. Philomena Miami, Florida

Michael Malone is a graduate of the diocesan University of Dallas and lived in SanAntonio. He and his wife Jane are members of Our Lady of the Atonement parish. His field of endeavor involves an exhaustive study of all things touching the Catholic Church, from which he has composed, edited, and published some fifty books, essays, and articles over a penod of thirty-five years.