Home/History/The Papal Plan for Restoration: Restoring the Catholic Priesthood
67 of 76 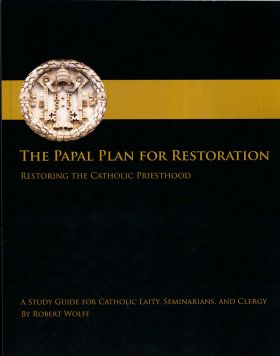 The Papal Plan for Restoration: Restoring the Catholic Priesthood

A Study Guide for Catholic Laity, Seminarians, and Clergy - By Robert Wolfe

Large 8.5" by 11" format 200 pages - paperback
As the title suggests, this book describes a plan taken from key papal encyclicals that engendered and safeguarded the vitality of the Catholic Faith in the prospering pre-Conciliar Church. That plan is still being followed by small traditional Catholic communities around the world today, producing that same vitality in their members. The families in these communities, particularly the heroic mothers in these large families, produce many priestly vocations. Shepherded by the traditional orders that serve them, these families seed the restoration of the Catholic priesthood.
In the Book:
• A wake-up call for Catholics.
• Modern popes quoted acknowledging the crisis in the Church.
• Extensive statistics on problems currently facing the Church.
• A thorough study guide on the problems and their proposed solutions.
• More than twenty papal encyclicals quoted.
• Six key encyclicals studied in detail.
• Six elements of the Plan developed from the encyclicals.
• Ten cause-and-effect relationships developed, statistically linking the crisis with the  implementation of changes subsequent to Vatican II.
• Statistical evidence that the current crisis could have been prevented had the bishops at Vatican II not ignored the quoted warnings of pre-Conciliar popes.
• A logical, defendable, statistical estimate of the abundance of Catholic priests the Church would have today if pre-Conciliar Church growth had continued.
• Statistical evidence that the current shortage of priests has a proven remedy not being seriously  considered by our bishops.
• Statistics on vital Catholic communities successfully implementing the Plan.
• New seminaries ordaining many traditional priests for the Extraordinary Form Mass.
• Integral to the study guide is an extensive survey questionnaire on the Faith, the Mass and The Plan.

This plan for solving the "crisis" of a continuing lack of priestly and religious vocations in the church at large since Vatican II is not simply another litany of problems, although it does provide much statistical evidence illustrating the current dilemma. This book delineates a clear and convincing presentation of the SOLUTION to the problems that have been pointed out to us by the popes. This solution has been very clearly laid out for us by the Church, if we are only willing to implement it.