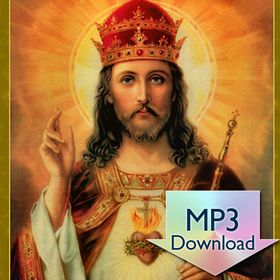 This course is a brilliant distillation of the fundamental principles of the Social Kingship of Jesus Christ.

Most of the classes are between 15 and 30 minutes in duration and the subject matter is largely drawn directly from the social encyclicals of Pope Leo XIII. The course was intended to lay a foundation for a study of those forces in the modern world that are at war with and undermining the fabric of Christian civilization, and that have been successful not only in dismantling the laws and government every single Catholic nation but also in practically extinguishing Catholic belief in the principle that Christ should rule over every nation and that the laws of every state should conform to the Churches teaching on how societies and governments should be established and function.The teacher does not delve into detail regarding the actual construction of a Christian state, rather, he explains and reiterates the basic principles of the duties of a Christian State and the duties of a Christian toward the state. Some of the Encyclicals discussed are: Rerum Novarum, Libertas Humanas, Diuturnum Arcanum, Immortale Dei, Sapientiae Christianiae,and Humanum Genus.

1.) Living the Kingship of Christ
2.) Applying Basic Christian Principles in Society
3.) The Three Transcendentals as Goals for a Christian Society
4.)The Church Speaks: The Popes and Social Teaching
5.) The Encyclicals of Pope Leo XIII
6.) The Two Swords: The Church and the State in Relation to Each Other
7.) The Responsibility of Christians in Society
8.) Catholic Involvement in Politics
9.) Leo XIII and Human Liberty
10.) Leo XIII and the Social Teachings
11.) Rerum Novarum - The Great Encyclical pt. 1
12.) Rerum Novarum - The Great Encyclical pt. 2
13.) Social Teaching in Practice: The Guilds pt. 1
14.) The Importance of Work in Society
15.) Social Teaching in Practice: The Guilds pt. 2
16.) Humanum Genus; Conclusory Remarks

For years, Douglas Bersaw and Br. Francis M.I.C.M., the superior of the Slaves of the Immaculate Heart of Mary at Saint Benedict Center in Richmond New Hampshire, drove together to the Boston area, where Saint Benedict Center was founded, in order to give classes every Thursday night. These classes were given as part of a program of education established by Br. Francis for the training of Catholic lay apostles who wished to work for the conversion of America to the Catholic religion, and which is known as the Saint Augustine Institute of Catholic Studies.

These classes lasted between 60 minutes and 90 minutes, and for many years the time was shared by both teachers. Eventually, due to age and disability, Br. Francis ceased his travels, but he had Br. Anthony Mary continue the work on his own. Due to the lack of sophisticated recording equipment and various deficiencies of the recording circumstances, the quality of all of the recordings is not perfect. Modern digital enhancement has helped somewhat to remedy this.