Home/All Products/The Third Secret - Vol. III of The Whole Truth About Fatima
292 of 327 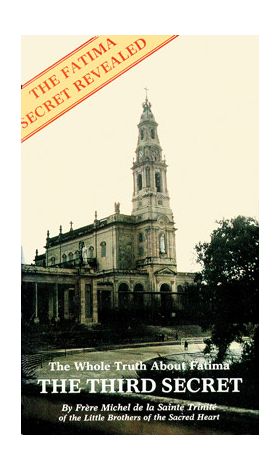 The entire extraordinary mystery of Fatima, studied step by step from the beginning; for our conversion and our salutary consecration to the Immaculate Heart of Mary; so as to arrive at the discovery of the Secret of secrets, the third part of the secret given by the Blessed Virgin Mary on July 13, 1917, which is still hidden at Rome; and to put an end to our fears, for there is a victorious, glorious conclusion to this era of errors, carnage and persecutions spread all over the world by Russia as Mary, and She alone, had announced in 1917.
Let us go forward, then, for we shall see the salvation which only the Immaculate Heart of Mary could promise and will obtain from Jesus for us!
Volume II is also available:
Vol. II -  The Secret and the Church (1917-1942)

This three volume masterpiece was written by Frère Michel de la Sainte Trinité of the Little Brothers of the Sacred Heart under the direction of the late Abbé Georges deNantes. Frère Michel, after writing this masterpiece retired to the secluded life of the Cisterians, of which order he is now the Superior.

This work is of great historical significance since it is the history of the dark ages of the 20th century, the most backward, cruel, and barbaric of all centuries in the Chirstian era. It is a story however, full of hope and great beauty because it is the story of our age as God sees it. No Catholic or historian can afford to pass up the chance to read this entire work if he would understand the passion of our age and the years to follow.