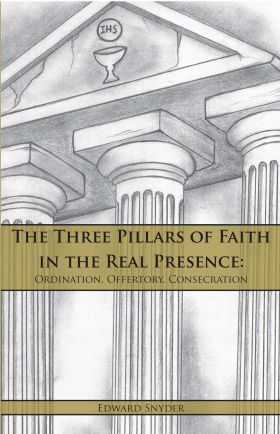 The Three Pillars of Faith in the Real Presence: Ordination, Offertory, Consecration

Since the introduction of the Novus Ordo liturgy in the 1960s, Catholic belief in the Real Presence and the essential sacrificial nature of the Mass and of the priesthood has declined precipitously. In addition, the number of men entering the priesthood and the percentage of Catholics regularly attending Mass has also fallen off dramatically. When seeking answers to why these facts are so, the author of this treatise, Edward Snyder, has undertaken a substantive study of the words used in both the ancient and the new liturgy and arrived at some startling discoveries and conclusions.

Since belief in the Holy Sacrifice of the Mass and Christ’s true presence in the consecrated host are beliefs central and essential to the Catholic religion, it is important to understand why these beliefs are no longer held by so many. Certain core doctrines believed by the first Christians were supported by the linguistic evidence they left in the New Testament. What does this linguistic evidence consist of? Specifically, about the year 325 B.C. the Hebrew Old Testament was translated into Greek. This translation was done by seventy Hebrew scholars and it is known as the Septuagint. The Greek and Latin New Testament texts contain many semitisms—that is words that were used based on the Aramaic spoken and written by the Church when the original Christians were primarily Aramaic speaking—that can only be properly translated into English, or any other vernacular language, if the Hebrew roots are understood.

This philological study of the root of words used in the scriptures and the liturgy will be most useful as an aid to understanding why clarity of belief is disappearing so rapidly in the Church of our day.

Understanding the problem will help us to solve it. Diagnosis comes first, then a cure may be possible. For those who desire it, here is a
significant analysis and diagnosis.