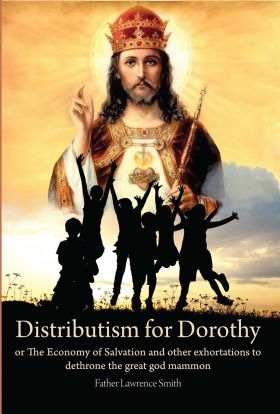 Distributism is not something that is to be enacted by any state or political entity, although they can and must do what is possible to facilitate its accomplishment. Distributism is a way of living and this way of living must be protected and nourished by society and its organs, i.e. families, societies, and governments. The responsibilty therefore lies primarily with families to begin to live the distributive way of life. Distributism is the living out of the Gospel in our daily lives and it will bring in its wake, peace, joy, and true freedom such as can be found only among the subjects of Christ the King.

Contents
Part One
Preface: “Distributism for Dorothy”
Bad News for Modern Man
Sensus Catholicus with Father Smith
Reflections on Belloc’s On Usury
Father Smith Presents a Layman’s Explanation of Usury
Money Does Grow on Trees
Leaping into the Handbasket Bound for Hell
An Epilogue to Belloc’s Europe and the Faith
Re-establishing Christendom I: In the Faithful Heart
Re-establishing Christendom II: In the Homes of Holy Families

Part Two
Introduction: A Skunk by any Other Name Still Stinks
Dissolution of Church and State
3 April, Jubilee Year—4th Monday of Lent
Fanfani and Friends
Dear Editor (SeattleCatholic.com)
Father Smith’s Epistle to a Rich Young Man
The Fate of False Infallibilities
Defining Distributism
Where Does the Remnant Live?
In Time of Advent
The Two Faces of the City of Man
The Feast of Saint Barnabas the Apostle
15 November 2001: Saint Albert the Great: Albertus Magnus
Saint Joseph the Worker
21 June 2001—Feast of Saint Aloysius Gonzaga
Introduction to Distributist Perspectives Volume I
The Economy of Salvation
Sensus Catholicus with Father Smith

Part Three
Preface to Volume III:
Three Months of Christmas and the Holy Rosary
Wandering Back from the Desert
Re-establishing Christendom III: In the Church
Defining our Terms
Regnum Christi