Home/All Products/A Sign of Contradiction; As the Master, So the Disciple
14 of 332 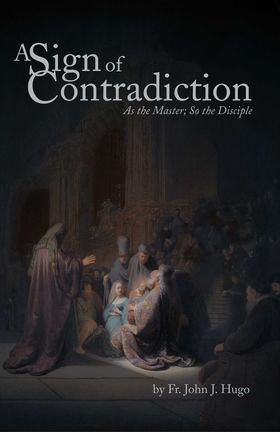 Fr. Onesimus Lacouture was a Jesuit who had the great gift of being a masterful director of souls. Being a Jesuit formed in the old mold of true Ignatian spirituality and deeply affected by the so-called “French School” of Cardinal Berulle, St. John Eudes, and St. Louis Marie de Montfort, his retreats, given to over 6000 American and Canadian priests, produced extraordinary results. His most well known disciple and good friend, Fr. Hugo, has produced for posterity, the Notes from those Ignatian retreats as given by Fr. Lacouture and subsequently by himself and many other priests.
A Sign of Contradiction is Fr. Hugo’s apologia for the work of Fr. Lacouture and the “spiritual movement” that grew spontaneously from the ardent, enlightened, and effective preaching of the retreats. He describes the movement, its opponents and its supporters as well as the revelatory doctrines so convincingly presented by Fr. Lacouture.
This book is spiritually motivating, historically informative, and powerfully illuminating in regard to the condition of the Church and the faithful in North America during the mid-twentieth century. The Gospel of Peace, and Applied Christianity (the retreat notes of Fr. Lacouture) by Fr. Hugo are also available from Loreto Publications.