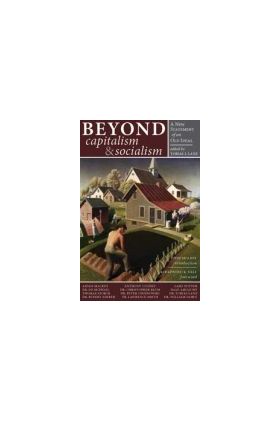 A New Statement of an Old Ideal

Writing from the perspective of Catholic Social Doctrine, the twelve Catholics who take their stand for an ideal Beyond Capitalism and Socialism are offering an escape to modern man from the horns of the dliemma upon which he is hanging - and upon which he was hung by the makers of the modern world from centuries ago. Rejecting both the collectivist and statist approach to worker security and welfare caretaking, and the even more oppressive laissez-faire conception of modern capitalism in which what's good for business is good for the world, the authors introduce Distributism, Solidarism, and Corporatism as three schools of effectively the same Social Catholic approach to socio-economic life and organization. Offering historical background, principled and theoretical arguments, and some initial ventures into practical suggestions for implementation of this "third way" beyond capitalism and socialism, the essays contained in this volume will engage, inspire, and perhaps even provoke and aggravate as they flesh out a picture of independent owners and yeoman farmers, small business associations, and economic life subortinated to the genuine good of man rather than vice versa. What they will not do is fail to shatter the left vs. right paradigm into which all modern thinking about economics and society has been forced.