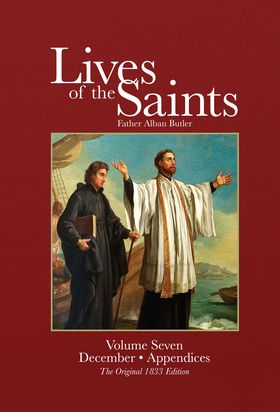 Very few published works require such a lengthy explanation of exactly WHICH edition is being offered, in what format, and why, than Fr. Alban Butler’s Lives of the Saints. The reason is that there are so many very different books being printed under this author’s name and under this title due to it’s long history (the work is almost 300 years old) and its universal popularity. Few catholic books except the Bible, the Confessions, the Imitation, and the Summa, are as widely read. This book has also been extensively revised, altered, and updated since its original publication, with new editions, even 21st century revisions being made, that we feel the time is ripe for an original, unexpurgated, and unrevised print version to be made available.

This edition is widely considered to be the most complete and authoritative ever issued. It is the 1854 edition of D. J. Sadlier of New York, and in the Preface it gives its “pedigree.” The original was printed anonymously in London in 1759, after 30 years work on the project. The edition published by Sadlier is an exact replica of the Dublin and London edition of 1833. Being a scholarly work, but also a work deeply imbued with the piety and devotion of a priest’s lifetime effort, it is loaded with footnotes which comprise a significant proportion of the total text. In the original book, the footnotes were printed in such a small, closely-set typeface, that they were almost unreadable.

Loreto Publications has utilized the recent development of OCR scanning to extract the original text and to put it into a modern, highly readable, and much larger font typeface than any of the old editions. We have extensively proofread the text thus generated, and have made the layout “user friendly” as the moderns so succinctly state. In addition, our already available edition of Butler’s Little Pictorial Lives—which is a drastic abridgment of this original edition to one volume, illustrated, with one saint and one image for each day of the year—has provided us with 365 beautiful 19th century engravings which we have added to this original un-illustrated text.

Loreto has made a few corrections of obvious typographical errors and has slightly altered some capitalization rubrics and some spellings, but we have has refrained from alterations to the text. We think that modern readers are not so uneducated as to need the work “updated” for them, either as to content or style, since the beautiful expressiveness of Butler’s 18th century grammatical and rhetorical mastery is not so far removed historically as to render it unintelligible to any ordinary 21st century reader. We are certain that our readers will appreciate the original work for its piety, beauty, and comprehensive scholarship.