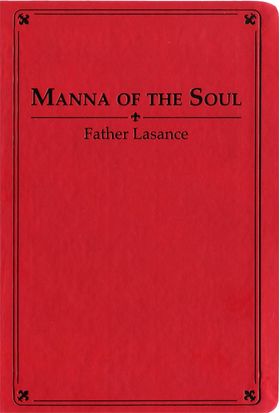 This is a beautiful and very useful prayerbook. Originally put together by the prolific Father Lasance, this book was reccommended by Pope Pius XI. It was printed in a large font with plenty of spacing and was designed for easy reading in the low light conditions found in many Catholic churchs.

Loreto has produced a modern edition on bright white paper for ease of reading in places where the lighting is less than adequate or for those people who either need magnifiers for close up reading or whose eyesight is less than what it used to be. This is the only truly large print prayerbook available with all of the old traditional prayers.

Foreword
Table of Moveable Feasts
Holy-Days of Obligation
Church Law of Fast & Abstinence
Ceremonies for the Laity
Low Mass
Asperges
High Mass
Requiem & Ferial Masses
Benediction
A Rule of Life
All Day Long
Morning Prayers
Evening Prayers
A Short Form of Morning Prayer
A Short Form of Evening Prayer
The Angelus
The Regina Coeli
The Ordinary of the Mass
Mass on the Day of Death or on the Day of     the Burial of one of the Faithful
The Absolution after Requiem Mass
Marriage Service & Mass
Ritual for Celebration of Matrimony
The Nuptial Mass
Indulgenced Prayers for use at Mass
Devotions for Confession
Before Confession
Examination of Conscience
After Confession
1. Devotions for Holy Communion
Before Communion
After Communion
2. Devotions for Holy Communion
Before Communion
After Communion

Another Form of Thanksgiving

I gave a review of the leather-bound version and cannot comment on the quality of the e-book. However, I can say that the content of this book is wonderful, as books written by Father LaSance are very very good.
Lisa 09/20/2022, 09:26 PM
At first the print seemed too big but after having had this book for over two months I have come to appreciate the large, bold print. The leather is soft and the binding is well done. The quality of content is excellent. I am blessed to have this book.
Lisa 09/20/2022, 09:22 PM
Write a review