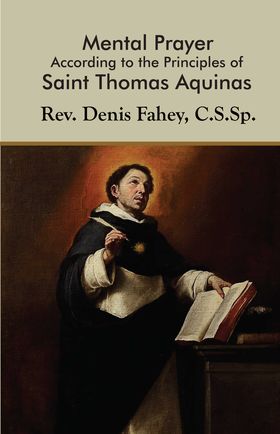 Mental prayer is, in a certain sense, the most important exercise of the spiritual life. Fidelity to it (saints tell us) will ensure salvation; its complete abandonment may lead to perdition; progress therein means a corresponding progress in the interior life of union with God.
Hence, the special value of books which treat of mental prayer. The excellence of the present work lies in the source from which it is drawn. St. Thomas Aquinas holds a unique place among the Doctors of the Church. He has become the official theologian of Christ’s Mystical Spouse, her Universal Doctor. She has canonized his teaching, making it her own in all its essential elements.
This is the first of of Fr. Fahey’s books to be published, and it remains one of his most important for it presents the foundation of his spiritual life of prayer that was so fruitful.

To the Holy Family of Nazareth, the Cell divinely preordained for the restoration of the Supernatural Life and Order, through membership of Christ’s Mystical Body, to the fallen children of the First Tiller of the soil, and to those ardent lovers of the Irish countryside, Saints Patrick, Brigid, and Columcille, this little work is humbly and lovingly dedicated by the author.
“We must recognize that one of the causes of the disequilibrium and confusion of world economy, affecting civilization and culture, is undoubtedly the distaste and even contempt shown for rural life with its numerous and essential activities. But does not history, especially in the case of the fall of the Roman Empire, teach us to see in this a warning symptom of the decline of civilization? …It cannot be too often repeated how much the work of the land generates physical and moral health, for nothing does more to brace the system than this beneficent contact with nature which proceeds directly from the hand of the creator. The land is not a betrayer; it is not subject to the fickleness, the false appearances, the artificial and unhealthy attractions of the grasping city. Its stability, its wise and regular course, the enduring majesty of the rhythm of the seasons are so many reflections of the divine attributes.…
“Your consideration will not be limited to the economic and technical sides of the agricultural problem, for you must be also interested in social justice and the Common Good. …It is necessary to set up social organizations which will take care of the legitimate interests, the material and moral progress of the agricultural population. This will tend not only to check the evil of rural depopulation. This will tend not only to check the more conscious of their social function, more proud of the dignity of their life and vocation, of the greatness and sacredness of their task” (Pope Pius XII: Letter to Rev. J. P. Archambault, S.J., President of the Social Week, Rimouski, Canada, August 31, 1947