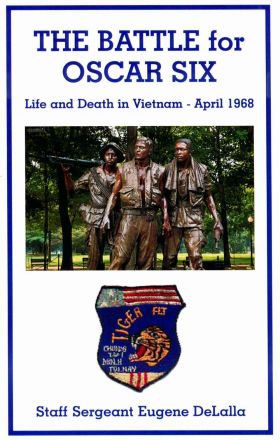 Air power was a key to the American war strategy throughout the Vietnam war. Numerous air bases were constructed throughout Southeast Asia for the use of our Air Forces during the war. The protection of the personnel, planes, and other materiels of war housed at those air bases was essential, and the task fell to the Air Force Security Police. They did their job well and had a hard earned reputation on both sides of the conflict. They were considered “hard nuts to crack”.

This is a fictionalized account of how some of those airbase perimeter defenders kept that reputation during one tough encounter shortly after the famous “Tet” offensive in the winter and early spring of 1968. The Battle for Oscar Six takes place at Tuy Hoa air base in the II Corps theater of the war, but it could have been at any air base, and the men depicted here who fought that skirmish could have been any of the hundreds of thousands of American boys who gave their youth, their blood, and oftentimes their lives in that protracted struggle known as “The Vietnam War."

This story is a fictionalized version of actual events that occurred at Tuy Hoa Air Force Base in Vietnam in the spring of 1968. The focal point of the “incident” was the main observation tower on the air base, Oscar Six, which overlooked the valley to the southwest.
Of all the movies made concerning the Vietnam War, I have neither seen nor heard of any that depicts the battles that were fought by the Air Force Security Police—perimeter defenders par excellence.

The Narration of the Battle for Oscar Six is about those unsung perimeter defenders, all 111, who died protecting personnel and aircraft during the many years of the Vietnam War.  My story is dedicated to them.

The noisy, lumbering C-130 troop transport hit the tarmac at Tuy Hoa Air Force Base around 11 PM after the short hop from Cam Ranh Bay, the embarkation point for most Air Force personnel.

As the door swung open to release its pent up cargo, there were lights, noise, and exhaust to greet this new batch of cops on the busy flight line. But most attention-getting of all were the tracer rounds being fired from .50 caliber heavy machine guns manned by Army troopers at the Phu Cat base camp. Positioned just south of the air base, their duty was to direct harassment fire toward the surrounding foothills to the west in the ongoing attempt to thwart the movement of enemy and supplies during the dead of night.   Sometimes successful, sometimes not, it made for a stunning display, not unlike fireworks, unmatched by anything seen back in the United States, or as we referred to it, “the world.”

The date: December 16, 1967, the beginning of my tour in a country that I had only read about in the newspapers or heard about from GI scuttlebutt back home. But now reality and the real possibility of being taken out of this world—unwillingly—hit me like a ton of bricks. This was Vietnam, and it was to be my home until next December 16—I hoped.

After initial paperwork and official assignments (day or night flight) were completed, there was intense weapons training (just in case we had gotten a little rusty since our recent weapons and hand-to-hand training at the Army’s Camp Bullis and Lackland Airforce base in the US), including the introduction of some new armaments such as the recoilless rifle and the LAW (anti-tank) shoulder-fired rocket. All this was necessary before we were actually able to take to the field to defend against a determined enemy bent on defeating the mission of the US Air Force in Southeast Asia.

There is routine involved in being in a war, as well as the possibility of all-out chaos—this was the case in the days leading up to the Tet Offensive of January 1968.

But my story is not a blood-and-guts one such as those told by many airmen and soldiers recounting their experiences during the attempt of the Viet Cong and North Vietnamese to take back “their” country during that massive offensive; no, this story is based on a particular incident that involved my comrades and me during a ferocious post-Tet battle. Yes, there were many additional skirmishes and attempts at penetration of American air bases all throughout South Vietnam—even though the Allies had decimated many enemy divisions (both Viet Cong and North Vietnamese) during Tet, their strength hadn’t been reduced to the point for the allied forces to claim total victory. Sadly, just the opposite had been reported back in the world via the always-left-leaning media and their “6 o’clock news” anchors.