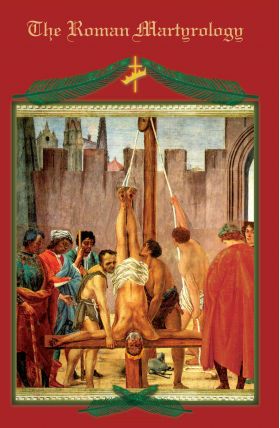 We have chosen to re-issue the Third Turin Edition of the Roman Martyrology for many reasons. Among them are the nobility of its style, the serene chastity of its language, the continuity of its ancient lineage, and the fact that it is essentially the same text read by countless souls over the centuries on their pilgrimage to the Eternal Jerusalem. In a word, tradition.
You will not find listed here the numerous saints canonized over the last sixty years. This may be unfortunate but some lack cannot be avoided; there are other sources and newer calendars. The historical importance and the spiritual value of this edition is inestimable. We hope that this offering from Loreto will fill the desires of many souls  who will know best how to utilize this volume to their advantage. This 20th century may well have been the bloodiest in the long and glorious history of the Church of God upon earth. Remember that the blood of the martyrs is the seed of the Church. God willing, we will reap a bountiful harvest of souls in the 21st century.
May the example of those who have already tread the path of the cross, fortify our souls, give us courage, and provide hope that we too may have the grace to receive, with grateful affection, whatever end the providence of God has destined for us.


"We have the names of almost all the martyrs arranged according to the days on which they suffered, collected in one volume, and daily we offer Masses in their honor. This book does not tell us to what extent each one suffered but only his name, and the place and the day of his suffering is recalled. And so it happens that many from different lands and provinces are glorified with the commemoration of their martyrdom each day."


There are two lovely anecdotes which Saint Thérèse relates in her autobiography. Both events occured on the pilgrimage she and her family made to Rome in 1887, just ten years before the end of her  earthly sojourn. The first concerns the stop they made at Loreto to visit the Holy House of Nazareth. Celine and she would not be content to receive communion in the Basilica, they would have Our Lord come to them in Mary’s house. How fitting and how touching that it should be so. The other is the famous story of how they courageously and boldly leapt to the floor of the Coliseum, against all rules, to kiss the soil soaked with the blood of the martyrs. Such divine impertinence! Such childlike enthusiasm! Such unearthly impatience! Of this spirit are all the martyrs of our holy faith. The spiritual child, like any earthly child, must have what it desires, nothing less, and quickly. No, heaven cannot wait for us, nor can the saints wait for heaven. Herein are the names of countless souls who have finished the race and fought the good fight. All have received their eternal reward. Pray that we do likewise.

Pages:
372 pages
Binding:
Hardcover book with Dust Jacket and Satin ribbon page marker
Priests and monks, in addition to offering the Mass every day, must also pray the Divine Office (also called the Breviary, or Liturgy of the Hours). This involves stopping 6 to 7 times a day to pray: by reciting assigned psalms, a hymn, and some particular prayers of the day. This is the Church's prayer. Anyone who prays these "hours" is praying with, through and for the Church as part of her official, daily liturgy.

Until the late 1960s, part of praying the Office was to pray the morning "hour" called "Prime" (meaning the first hour after sunrise). After praying "Lauds" at dawn, praising nature and the wonder of a new day, "Prime" then brought one's focus to the day ahead, asking God to sanctify your work for the coming day. In the late 1960s, in an effort to reduce the burden of praying the Office on busy priests (it is a sin for them not to pray the Office very day), the Pope abolished the hour of "Prime".

Part of praying "Prime" was to recite the day's entry from the "Martyrologium Romanum" (in Latin, of course!). This book was the Church's official list which, for each day of the year, listed all those Saints and Martyrs who were to be remembered on that day, usually for having died on that day. The Martyrology is therefore (along with the Breviary, the Missal, and the Ritual) one of the traditional liturgical books of the Church.

This present volume is the English translation of the Martyrology as it was immediately before the suppression of the hour of Prime. It can therefore serve its original purpose of being used for those who still pray (as is their right) the 1961 version of the Breviary, and therefore the hour of Prime. It can also serve as a wonderful daily meditation on all those holy men and women who have gone before us heroic in their faith, and who do not necessarily have feastdays celebrated in their honour or Churches named after them.

Because this version dates form the 1960s, it does not include any of those holy people beatified or canonized by Paul VI or later Popes. Pope John Paul II, in his long reign, is said to have canonized more saints than all his predecessors put together. There was also a general rearrangement of the calendar of saints by the Vatican in the early 1970s, removing the feastdays for some (especially those for whom there is scant historical data), moving them for others. The Vatican always had it on its to-do list to update and republish the Martyrologium - to accommodate the changes in dates for some saints, and to include the explosion of saint-making activity of Pope John Paul II. However, since the Martyrologium was no longer a part of the daily liturgy of the Church, there was no hurry.

Rome has now published the updated Martyrologium (in Latin), and an English translation will eventually be forthcoming.

In the meantime (and even afterwards) this English version of the pre-Vatican II Martyrology is excellent and nourishing, and a reminder to us all of those who have died for their faith, or who went to their deaths having lived heroic virtuous lives.

This book deserves to be in every Catholic household. It deserves to still be part of the morning prayer of every priest and monk in the world!
Verified Amazon Customer 08/27/2021, 07:22 PM
This book puts us in mind with all the saint who suffered martyrdom through the centuries. Their suffering were incredibly cruel. Helps us to humble ourselves and appreciate what others did for the Faith to prosper.
Verified Amazon Customer 08/27/2021, 07:21 PM
Write a review